With just a couple of days left for the Australia series, the famous banter directed at the opponents has been missing. 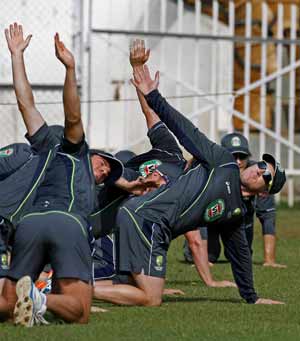 There have been a number of factors that have contributed to the making of the great cricketing rivalry between India and Australia. And one of them is the mind games that take place before the start of a series.

Usually, the Australians initiate these games with banter directed towards the opposition to spice up a contest. It is also done with an intention to give the Aussies a mental boost before action unfolds. It is a tactic which the Aussies have mastered over the years. (Also read: Ashwin, Jadeja prime targets for Aussies)

Surprisingly, all those pre-series talks are missing this time with barely a couple of days to go for the start of the series. From the looks of it, the Aussies want to keep the build-up to this series a low profile affair. "We are very polite," is how Australian skipper George Bailey responded when asked about the famous mind games.

Bailey admitted it is not the same star-studded Australian team. "And certainly, (we) don't probably have superstars like Shane Warne or Glenn McGrath. We don't rely heavily on one or two players. If we are going to play good one-day cricket... win this series, we will need all 13 or 14 of us to play really well," he said.

Bailey, however, did not rule out sledging from taking place. "I am not sure of that (sledging). I don't know. It depends on the players out there. Due to the IPL (Indian Premier League) and Champions League, players know each other so well. They are really close friends that are playing against each other now. In the past, they did not know each other well," said Bailey.

Comments
Topics mentioned in this article
Cricket George Bailey India Cricket Team Australia Cricket Team India vs Australia 2013-14
Get the latest updates on ICC T20 Worldcup 2022 and CWG 2022 check out the Schedule, Live Score and Medals Tally. Like us on Facebook or follow us on Twitter for more sports updates. You can also download the NDTV Cricket app for Android or iOS.