India vs Australia: Virat Kohli and hosts' dominant win sends shockwaves Down Under

The Australian press and fans have been left stunned by what their team went through in Jaipur on Wednesday. Despite their batsmen hitting 359, the eventual defeat to India has left them, it seems, quite numb. 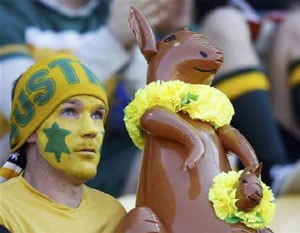 Team India's victory against Australia on Wednesday night has left not just the tourists stunned. Fans and the media back home too are coming to terms with the hurricane-like batting that hit their team at the Sawai Mansingh Stadium. (Read: Match report)

While the Australian batsmen were impressive in their splendid effort of raking up 359 runs in the second ODI, the Indians were even better. And their win inside 44 overs sent shockwaves Down Under. "Australia has lost the unloseable," screamed a report published in The Australian. "In the end India did the unthinkable - cruising to a nine-wicket victory with 39 balls to spare."

Another report, this time in the Sydney Morning Herald, was titled 'Hats off to India'. The report here made ample use of adjectives more synonymous with war reports like 'devastating', 'carnage' and 'mayham'.

Each adjective did pale in comparison with the one used after as the Indian team mauled the tourists, leaving skipper George Bailey rather 'philosophical'. "Sometimes you just have to take your hat off and say India batted beautifully," he said after the match. (Related read: Kohli took the game away from us, says Bailey)

A match earlier, his team was on top with a 72-run win in the opening ODI. It all changed in the second as India romped home inside 44 overs despite the enormous target. Such was the impact of the huge-hitting that Bailey was demoted to the second spot in the list of highest scorers so far in the series, despite a 92* and 85 in the two matches. Rohit Sharma's 141* propelled him to the top and Virat Kohli's 100* - fastest ever by an Indian in ODIs - took him to the third place. (Tournament stats)

While the seven-ODI series has a fair way to travel, momentum though has shifted and at 1-1, this promises to be a thrilling encounter with, possibly, an even more riveting climax.

Comments
Topics mentioned in this article
Cricket India Cricket Team Australia Cricket Team George Bailey Virat Kohli India vs Australia 2013-14
Get the latest updates on ICC T20 Worldcup 2022 and CWG 2022 check out the Schedule, Live Score and Medals Tally. Like us on Facebook or follow us on Twitter for more sports updates. You can also download the NDTV Cricket app for Android or iOS.