Mahendra Singh Dhoni defended the bowlers of both the teams in the Twenty20 match in Rajkot, which India won, by pointing out how the dew factor affected their performance. 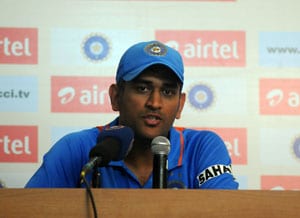 They might have been hit all over the park in the lone Twenty20, but Indian skipper Mahendra Singh Dhoni on Saturday said he expects his bowlers to adapt quickly and deliver in the upcoming ODI series against Australia starting in Pune on Sunday. (Read: Sachin Tendulkar's retirement no shock for MS Dhoni)

"In the last T20 game a fair amount of runs, 200 runs each, were scored. Overall the conditions were tough for the bowlers on both sides. But I am sure bowlers would adapt to the conditions as the series progresses and you can expect better performances out of both the teams (bowlers) who were expensive," Dhoni said ahead of the first ODI.

Dhoni defended the bowlers of both the teams in the Twenty20 match in Rajkot, which India won, by pointing out how the dew factor affected their performance.

"One also has to take into consideration the dew factor. Fast bowlers were unable to bowl yorkers while spinners found it difficult to extract turn and bounce," said the India stumper.

According to Dhoni, the new ODI rules which stipulate the presence of one extra fielder inside the field restricting circle as compared to the previous one, has made things very difficult for the bowlers to restrict the opposing batsmen in the last 10 overs.

"If you see the ODIs, now we will have one more fielder inside (the 30-yard field restricting circle). I don't know where to bring in that one fielder inside in the last ten overs when the batsmen are intent going for the bowlers. That's one area where we have to work on. We have to see how to use that channel to put pressure on the opposition," he said.

"Hopefully, we can see how we can use different bowlers to the best of our ability to restrict the opposition and not give away those extra 20 runs," he said.

Dhoni said among the two positives of the visiting team's inexperienced side, was that they bat deep and have a fair number of bits and pieces players.

"Australia have good batting depth and can bat up to number nine. That's their strength and that is why in the Twenty20 game, they were not too concerned about losing wickets and adopted an aggressive approach. They wanted to increase the pace. That's one of the reasons why our bowlers proved a bit expensive."

"They have got quite a few bowlers who can bat and batsmen who can bowl. If somebody is having a tough time there are others to fill in. They are a very good side with a general approach that is aggressive whether batting first or chasing," Dhoni said.

Expecting the wicket prepared for tomorrow's ODI game to be two-paced in nature, Dhoni was of the opinion that Rohit Sharma, who has been used as an opener in ODIs to partner Shikhar Dhawan, has adjusted well to his promotion up the order.

"The wicket has a fair cover of grass but at the same time it's a bit patchy. I think it will be two-paced. We have seen on this wicket generally there is a bit of low bounce.

"Depending on where you bat your approach changes, batting at no.1 is different from batting at 5 or 6 where many a time you don't get to bat. When you are opening you know if the game is happening you will get to bat. That way you can be better prepared.

"Considering all of these you have to change your approach. And I think Rohit has adjusted to it very well. I hope he continues to improve in each and every game," said Dhoni.

Pointing out how difficult it was for a player to keep performing consistently to retain his spot in the Indian team, Dhoni said the Indian Premier League is also doing its part in identifying talented newcomers, apart from the long-standing domestic tournaments like Ranji and Duleep Trophy.

"To be at the top and be part of the Indian team for long is very difficult as you have to keep performing. Form and fitness are the key factors.

"Apart from Ranji and Duleep games, the IPL has now become a platform to identify talent, if not actually selecting them. Hope newcomers who come in understand their roles and responsibilities and do well at the top level," he remarked.

The India skipper also brushed aside the absence of the Rajkot Twenty20's man-of-the-match Yuvraj Singh from the practice session today.

"It was an optional practice session and he opted to rest," said Dhoni.

Comments
Topics mentioned in this article
Australia Cricket Team India Cricket Team MS Dhoni Cricket India vs Australia 2013-14
Get the latest updates on ICC T20 Worldcup 2022 and CWG 2022 check out the Schedule, Live Score and Medals Tally. Like us on Facebook or follow us on Twitter for more sports updates. You can also download the NDTV Cricket app for Android or iOS.