Chappell hits back at Australia captain for telling media that former skipper's anti-board comments were irrelevant to his team. 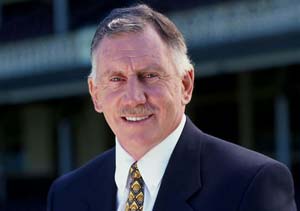 Ian Chappell has hit back at stand-in Australia skipper George Bailey for reacting to his recent column (in SUNDAY MiD DAY) which slammed Cricket Australia for sending their team for a one-day series to India at an inappropriate time.

Over the phone from Sydney yesterday, Chappell told MiD DAY: "I don't see what it has to do with my judgement -whether I am involved with the Australian team or not. My only involvement with the Australian cricket team was when I played with them. In fact, I would have thought my judgement is going to be better as an outsider than it is going to be if I am involved with the team. I think his (Bailey's) comments are nonsensical.

No sense at all

"I'm making a judgement from what I see and observe as a bloke who played Test cricket for Australia. I don't need to be told what's going on by either the players or people around the team because they are only going to tell me stuff that to me, is irrelevant. They in fact, get too close to the situation and they can't see it objectively. I don't understand Bailey's comments and I don't think they make any sense at all."

Asked whether modern players increasingly refuse to see the big picture by not accepting former players have a job to do as commentators and writers, Chappell (70) said: "I think what happens is that they hear what they want to hear because they are surrounded by people who have a vested interest in the team.

I make my judgements not impaired by having to follow the party line or having to make comments favourable to the Australian cricket team. I make my comments as an impartial observer and someone of some knowledge of having played the game and commentated on it. Therefore, I would have thought my comments are probably a lot more objective than the people who get too close to the team."

Refused then, not now!

Ian Chappell denied spurning an offer to commentate on the Ind vs Aus ODI series because he didn't agree to follow BCCI guidelines which reportedly bars commentators from expressing views on DRS, selection and Indian cricket administration. However, the Aussie didn't agree to an offer from the last India vs Aus Test series because he was uncomfortable with certain restrictions.

Comments
Topics mentioned in this article
Cricket George Bailey Gregory Stephen Chappell Ian Michael Chappell Australia Cricket Team India Cricket Team England Cricket Team India vs Australia 2013-14
Get the latest updates on ICC T20 Worldcup 2022 and CWG 2022 check out the Schedule, Live Score and Medals Tally. Like us on Facebook or follow us on Twitter for more sports updates. You can also download the NDTV Cricket app for Android or iOS.