I wanted to bat throughout the innings, says Rohit Sharma

Rohit Sharma agreed it took a long time to hit a century but said he was happy to have done it for a winning cause. 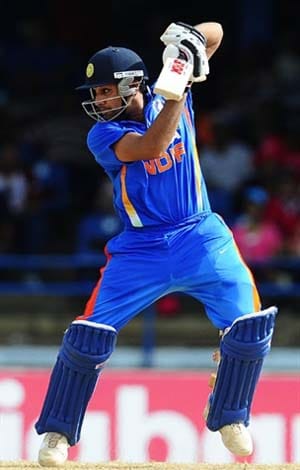 Indian captain Mahendra Singh Dhoni on Wednesday described his side's second ever highest successful run chase in ODI history against Australia here as one of the best performances with his young players showing controlled aggression.

"I think this has got to be one of the best you can see. Irrespective of the rule change, field restrictions and the pitch, I said 360 was still going to be a tall chase," Dhoni said after his side chase down 360 with 39 balls to spare to crush the Australians by nine wickets in the second ODI.

"I knew that we can chase down the target. Once we had scored 414 but Sri Lanka almost chased it down (at Rajkot in 2009). So I told the players not to look at the target and just go and play. Shikhar batted very well, Kohli was amazing, Rohit got a big knock," he said.

Dhoni said what was noteworthy of his batsmen was that they were controlled in that aggression.

"It was an ideal pitch, fast outfield, but you need to keep the shape as a batsman, that's what they did well. Most of our batsmen don't have the experience of a Yuvraj Singh who has played over 250 matches. What you have to do is to be aggressive, but what is important is that you don't have to slog, you have to maintain good shape," Dhoni said.

"Our batting is looking good, but it's unfair to assume the batsmen are going to chase a 300 plus target everytime."

Asked about his side's bowling performance, Dhoni said, "We need to improve in bowling. The reason is that if you attempt a yorker and it becomes a low full toss, it's fine, but if it becomes a waist-high full toss, then the margin is too much. It's one area we are looking to improve." Australian captain George Bailey was at a loss when asked what was the reason why his side could not defend 359.

"I don't know, you tell me. I am not sure what to feel at the moment. Obviously, it was some awesome batting. They (India) did it pretty comfortably in the end," he said. "Everything we tried, the ball seemed to go further and harder," he added.

Asked about the pitch, he said, "You think the pitch is a beauty? There are always things you can do differently, but there are no second chances."

Man of the Match Rohit Sharma agreed it took a long time to hit a century but said he was happy to have done it for a winning cause.

"It was very important for me to play the big innings. It took a long time coming, but I would like to say that the hard work never stopped. I agree that I have played some stupid shots to get out in the past, but this was much needed. I am happy that I scored a century to help my team win," said Rohit who scored an unbeaten 141.

"I wanted to bat throughout the innings. Both Shikhar and I understood the pitch and managed the chase, and Virat came and played a strong innings and his innings needs a mention as much as any."

Comments
Topics mentioned in this article
Cricket India Cricket Team Australia Cricket Team MS Dhoni RG Sharma India vs Australia 2013-14
Get the latest updates on ICC T20 Worldcup 2022 and CWG 2022 check out the Schedule, Live Score and Medals Tally. Like us on Facebook or follow us on Twitter for more sports updates. You can also download the NDTV Cricket app for Android or iOS.