Brad Hodge and Stuart Binny: Two of a kind

Brad Hodge's verdict on Australia's batting stocks is blunt. "They're rubbish, mate," he says. "I think technically, they're struggling. Guys are getting picked when they're not performing up to a certain level." He says he'd much rather have played six Tests with Hayden, Gilchrist et al then play 50 now. 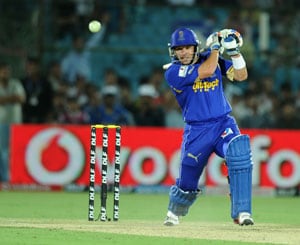 Bowlers who have been on the receiving end of Brad Hodge's bat in the closing stages of a Twenty20 match might disagree, but he can be a bundle of laughs - one-liners delivered with the deadpan panache of a stand-up comic.

Hodge, who gave up first-class and List A cricket a few seasons ago, is a Twenty20 specialist at 38, and a very good one at that. In a one-two tango with Stuart Binny, who can't help cracking up every few minutes at another gag in an interaction filled with them, Hodge has delivered several back-from-the-dead victories for Rajasthan Royals.

Coming in with a mounting asking rate at No.5 and 6, and delivering more often than not, must be tough for both of them. Right? "We flip a coin to see who walks out first," quips Hodge. "One day it's his turn, one day it's my turn. What we've come to understand with myself and Stuart is that we believe at least one of us will do well. It's nice to be able to trust in your partnership and friendship. We know we can get up to 12 an over with our ability. Beyond that, it's a bit of pot luck. But history has shown that we are capable of coming in and doing the job for the team for sure."

Binny agrees, and points to the confidence the duo have built over long associations and match-turning stands. "When we bat together, the key thing is that the belief is there that we can go ahead and get the runs. There'll be overs when I may get a couple of boundaries or a six, and the momentum is with me. Some overs I won't be striking the ball that well, so I turn the strike over to him."

"The thing is, sometimes you haven't got enough time to think about it, you haven't got a choice. You've got to go out there and whack it. The hardest thing for us is that we don't get time to get in, get the pace of the wicket, and build an innings. We don't have that luxury. That's probably why we've been successful as well. Both of us can come in and do it with one or two balls instead of taking up ten or 12 balls. You have to train yourself to do it. It doesn't come by accident."

Binny has honed the art of getting stuck into the bowling quickly. "The maximum I would bat in a game, if I got to bat ten overs, is about 30 balls. I try to play like that in the nets, taking on the bowling from ball one so that it's not something new in a match. It all starts in practice, where you need to know your areas and shots."

They are alike, yet contrasting. Both are stocky batsmen who have become integral to Rajasthan's plans, with a similar belief in their ability to pull off big chases. And coincidentally, in IPL VI, both scored exactly 293 runs. While Hodge had the highest average, Binny had the best strike-rate among the top six batsmen. On the other hand, Binny has a full career to look forward to, while Hodge played in an era when Australia had an over-abundance of riches and couldn't get more than six Tests, even though he averaged 55.89 in them - an irony that's more stark when you consider Australia's bare batting cupboard today.

Hodge's verdict on Australia's batting stocks is blunt. "They're rubbish, mate," he says. "I think technically, they're struggling. Guys are getting picked when they're not performing up to a certain level. When I was playing, you had to make 1,000 runs in a season to get picked for your country. Otherwise, you didn't have a chance. That's averaging close to 50 for the whole summer. Now, you can average 30 and you get picked. So the results don't surprise me. I look at the talent in India, the depth and the skill, and I think it's in a far more commanding place than Australia at the moment, for sure. I think we're in a real hard time at the moment and it'll take a while to get out of it and become extremely competitive like we were."

Does he then regret not being born ten years later? "No," says Hodge, immediately and emphatically. "I'd much rather have played six Test matches with Hayden, Langer, Ponting, Martyn, McGrath, Warne and Gilchrist than play right now. To me, that means a lot more. In 50 years' time, when I can tell my grandkids who I played with, I think that's a special achievement.

"It doesn't matter if I've played 50 games or six. My goal was to be the best I could be, and I'm still doing it now. The selectors choose your fate, you can't pick yourself.

"This is the hardest thing in cricket," adds Hodge, before delivering the line that has Binny guffawing the loudest. "This is why Stuey should beat his dad up." 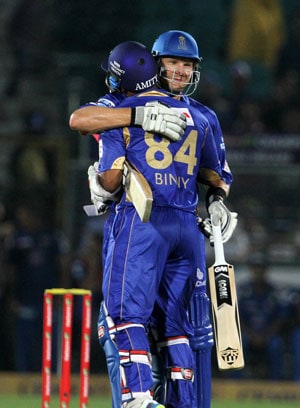 Binny, whose love for the game came from watching Roger, his father, play, remembers the early years fondly. "I was too young to understand what cricket was technically, but just going out and watching the teams practice, standing in the nets, bowling to some of them in the nets - those are things that I still remember," he says. "That's what made me love the sport and get into it."

Though they are at different stages of their careers, that's hardly been a barrier in learning from each other, and contributing to a team ethos that all the players seem to enjoy.

"I've learned from Hodgy to always try to take the game as deep as possible," says Binny. "One over can change the game. Rather than trying to go too hard too early, he always knows that you can get that 14-run over."

When put to them that it seems incredible that so many different players come together for ten weeks in a year, and immediately seem to talk of the great bond at Rajasthan, Hodge says, with characteristic forthrightness, that "everyone's friendly and got a good personality. To be honest, in my opinion, two of the guys that I didn't like that much are gone. We've actually got rid of deadwood and the rest are brilliant."

Binny, who plays his best "when I'm enjoying the game", has found himself in a good space too. He's already having fun, and he might find himself putting recent learning to use when Rajasthan face off against Chennai Super Kings and MS Dhoni, the modern master of taking the game deep.

But even against opponents as formidable as Chennai and Dhoni, if Hodge and Binny are in the middle during the death overs, they will be confident of the simplicity of their gameplan. As Hodge said, "One of the things which I see in Stuart is, he backs his strengths. I do the same thing. Don't try to do something you can't do. It's a good lesson to learn."

Comments
Topics mentioned in this article
Cricket India Cricket Team Australia Cricket Team Rajasthan Royals Brad Hodge Stuart Binny India vs Australia 2013-14
Get the latest updates on ICC T20 Worldcup 2022 and CWG 2022 check out the Schedule, Live Score and Medals Tally. Like us on Facebook or follow us on Twitter for more sports updates. You can also download the NDTV Cricket app for Android or iOS.