The players are expected to discuss the rising problems of Australian cricket, and ways to combat the breakdown. 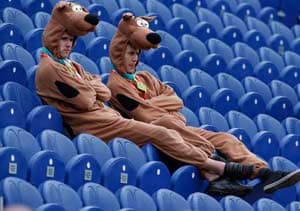 In a bid to improve the standard of cricket in the country, Australia's first-class cricketers - except the ones on tour in India - would come together at a conclave in Sydney next week to discuss the various issues plaguing the game, according to a report in The Australian.

The players are expected to discuss the rising problems of Australian cricket, and ways to combat the breakdown. On top of the agenda are expected to be the scheduling of the Big Bash League, and the cramped domestic itinerary. The solutions proposed are to be presented to Cricket Australia by the end of the year. This comes nearly two years after the Argus review, which sought to find an explanation for the downturn in Australia's cricketing fortunes after the Ashes were surrendered on home soil in 2010-11.

George Bailey, who is currently in India as captain of the limited-overs side in Michael Clarke's absence, was reprimanded by CA for voicing his concerns against the scheduling of the Big Bash League, while Cameron White, Australia's former Twenty20 captain, highlighted the importance of the Sheffield Shield season and the reduction in the number of one-day games.

The cricketing fraternity has also expressed concerns about the team's performance in Test matches. Australia have lost seven of their nine Tests this year, which included a 4-0 whitewash in India and the 3-0 loss to England in the Ashes. The batting failed repeatedly in challenging conditions, and lack of consistency in selection also provoked the ire of former greats who had benefited from more settled selection policies.

As many as 22 players have been used in the nine Tests - the most in recent times. The team was also hampered by a number of disciplinary issues, leading to Mickey Arthur's sacking as coach just before the start of the first Ashes Test in July.

"Rather than sit back and hope that things will turn themselves around, the Australian Cricketers' Association has embarked upon a project to understand what our members' views of the problems are and how they can be fixed," wrote Paul Marsh, ACA's chief executive, in a recent newsletter.

"The report will look at what we think are the issues at the moment, but also we will be very solution-focussed. We are going through a comprehensive process of consultation with our members, past and current, to hear their views on the draft report before presenting it to Cricket Australia at the end of the year."

Comments
Topics mentioned in this article
Cricket India Cricket Team Australia Cricket Team Michael Clarke India vs Australia 2013-14
Get the latest updates on ICC T20 Worldcup 2022 and CWG 2022 check out the Schedule, Live Score and Medals Tally. Like us on Facebook or follow us on Twitter for more sports updates. You can also download the NDTV Cricket app for Android or iOS.