The Aussies will start the tour with a one-off Twenty20 match in Rajkot on October 10 followed by seven ODIs. 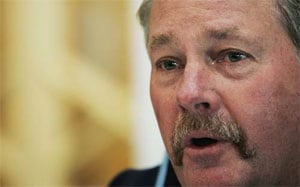 Their focus on the number one spot up for grabs in the upcoming ODI series against India, Australian captain George Bailey and coach Steve Rixon said the visitors are no longer intimidated by the sub-continental conditions courtesy the exposure they have got through the IPL here.

The Aussies will start the tour with a one-off Twenty20 match in Rajkot on October 10 followed by seven ODIs.

"If you look at the tournament, it is not just a tournament but a chance to be number one in the world in one of the three formats," said Rixon at the first media conference of the squad after its arrival here on Saturday.

"So, it is very important to the players, the coaching staff and Cricket Australia. At the end of the day, we want to sit back and want to be part of the number one side," he added.

If Australia win the series handsomely, they will go over India to become the world's number one ranked ODI team and if the hosts win they will retain their top spot.

Going into the intense contest against India, both Rixon and team captain George Bailey saw the advantage of having quite a few squad members with the Champions League Twenty20 exposure.

"Yes, we do know a few players that certainly I think one of the great things about the IPL, over the years. We have played at a lot of grounds that we are about to play at. Most of our players have played with and against a lot of Indian players, vice-versa, they have played with a lot of us," said Bailey who is leading the squad in the absence of injured regular ODI captain Michael Clarke.

"We know a lot about strengths and weaknesses and lot about the personalities, so there is absolutely some advantage for both the teams but also some areas to try and exploit," added Bailey who played for Chennai Super Kings, led by India captain Mahendra Singh Dhoni, in CLT20.

Rixon, a part of the support staff of CSK as its fielding coach, agreed with his captain, adding the squad still had plenty of work to do to get the better of the ICC World Cup and Champions Trophy holders.

"We still have got plenty of homework to do but the advantage as George rightfully said, we get to see them regularly now. We actually have more chance combating them," he said.

Rixon said the plus point for his team is that five of the players figured for their respective franchises in Sunday's CLT20 final between eventual winners and IPL champions Mumbai Indians and Rajasthan Royals.

"Coming into a tournament like this, you need performance players. A lot of the Indian players, in fact all of the Indians, would have played in the previous tournament so that has got to be an advantage for everyone playing."

"We have been fortunate to have five in the final, so to us, we are in a reasonable position as well. End result is, the guys who haven't been playing a lot of cricket, get them upto speed for the remaining, leading upto the T20 and the one-dayers. Once that happens, it's an even contest," he said.

Both Rixon and Bailey rued the absence of Michael Clarke, who was ruled out of the tour due to his back problem.

"You take Dhoni out, that probably answers your question," said Rixon candidly, while Bailey said, "We would love to have Michael here."

Bailey, however, brushed aside the criticism of former Australia captain Ian Chappell that the series was ill-timed as it was being held just ahead of the Ashes series against England.

Bailey said the Ashes series was a long way off and the focus was on the eight games the team will play in India.

"In terms of international cricket, it is months away. We have got 8 games here. We get back and have our round of first class matches as well. It is a lot to get to before we start the focus on the Ashes.

"Certainly as far as this group goes, there is more of a focus on the 2015 World Cup (to be jointly hosted by his country and New Zealand)," said the Tasmanian.

The 31-year-old visiting skipper also said the way the Australians bounced back to win the ODI series in England after the disappointing display in the Ashes and in the preceding Champions Trophy was a big confidence booster.

"It was great. It was disappointing how we played in the Champions Trophy. India played so well there and we felt the rain had robbed us of a legitimate chance to have a crack at that tournament. We played some really good one-day cricket to finish off the summer in Australia against the West Indies.

"So we were feeling pretty confident and it was nice to come across to England on the back of the disappointing Ashes, to see the guys who had been involved in the series to bounce back and perform really strongly," he said.

Conceding that the current Australian team did not indulge in making predictions ahead of the series like the ones that had the likes of Glenn McGrath and Shane Warne in them, Bailey said his team did not have superstars like the two all-time greats.

"We are very polite. I certainly think for Glenn and Shane, it was a way to challenge themselves. That was the way they got themselves fired up for the series. I think this group doesn't need to do that. We have got enough challenges. We probably don't have the superstars of Glenn McGrath and Shane Warne. We don't rely heavily on any one or two players.

Bailey said the past good record of the Aussies in India in ODIs -- they won 4-2 on two previous occasions before losing 0-1 in the rain-affected series in 2010-11 -- did not count for much as the team composition was different along with other variables.

"I find it hard to compare because the conditions change. A lot of things are variable. The game has changed. We have got guys playing T20 on a regular basis now. Back then it wasn't so prevalent.

"We have got guys who can turn the game with five overs to go in a 50-over match. The whole contest is a little bit different now. Twenty20, obviously back then was played littl, so you can't compare the players back then to the players of the modern day," he said.

Agreeing his team was inexperienced, coach Rixon saw it as a challenge to be surmounted.

"The inexperience is one of our learning curves at the moment. We have to get past that. It is probably our weakness, however, it is also our strength. Youthful exuberance often can be very good when it comes to the final crunches.

"George is relatively new at the captaincy but he has been around for some time. We are very confident about the job that George does. He has done it with distinction in Twenty20 and he gets his opportunity with the one day competition now.

Bailey did not read too much into the absence of a warm-up game for the team or the advancement by one hour of match timings for the ODIs in the wake of the dew factor.

"Most of the guys have been playing a little bit of cricket whether it is here or at home. The season has just started at home. Guys have just come off the English tour, Champions League, as far as match readiness goes, we should be good.

"I don't think it (advancement of timing) makes a huge difference. It (dew) certainly comes into play in couple of other grounds here and there is no doubt about that. We have to try and be aware once again most of our players have played at the ground, so we will be able to work out which ground would be affected more by dew.

"Generally here, the wickets are good one-day wickets, (leading to) good even contest between the bat and ball. So, I don't think it will make too much difference," he added.

Comments
Topics mentioned in this article
Cricket India Cricket Team Australia Cricket Team Stephen John Rixon George Bailey India vs Australia 2013-14
Get the latest updates on ICC T20 Worldcup 2022 and CWG 2022 check out the Schedule, Live Score and Medals Tally. Like us on Facebook or follow us on Twitter for more sports updates. You can also download the NDTV Cricket app for Android or iOS.