Rohit Sharma and Virat Kohli scored a century each to guide India to a massive 9-wicket victory over Australia in Jaipur to level the seven-match series at 1-1. 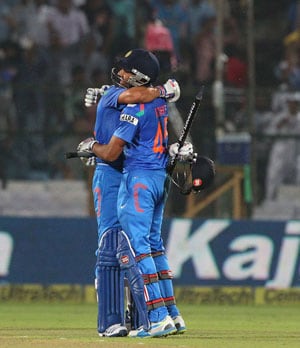 India beat Australia in in the second ODI to get back on level terms in the series. Follow highlights here: (Scorecard | Commentary)

Man of the Match - Rohit Sharma: It was very important to get a big innings. It came after a long time. I feel my hardwork is paying off, I am happy it came in a winning cause. I wanted to bat throughout the innings, I had played some stupid shots to get out previously. It was a much needed knock for me. Kohli deserved all the accolades, his knock was out of the world. He just changed the course of the game. Shikhar was excellent as well, it was a combined batting effort.

MS Dhoni: Simply a great chase, however flat the pitch was, it was simply outstanding. I just told them to go out with a clear mind, Shikhar (Dhawan) was terrific. Rohit and Kohli were brilliant. Our guys don't have the kind of experience, only Yuvraj (Singh) has played some 250 ODIs. The shot selection was simply superb, we did not lose our head at any time during the chase. We need to improve our bowling. Our batting is good, but it is unfair to ask our batsmen to score 350 everytime. They are working hard, and I believe they will improve. It is now a 5-match series, we will take each match as it comes.

George Bailey: What was happening? You should tell me (to Ravi Shastri). It was some pretty awesome batting performance by the Indians. Everything we tried, the ball simply disappeared to all parts of the ground. Well played to India. Our performance was good, but they were exceptional.

Virat Kohli: Wanted to go out there and play my part. Did not plan to get it in 52 balls. Went in and told Rohit to convert the start as he had got a lot of 60s and 70s in the recent past. Did not practice yesterday, just had throw ins. Was not worried about the short stuff. It is not about how many balls you get it but if the team wins or not. Once Rohit gets in it is difficult to stop him, he was the best batsman in the Indian Premier League.

Shikhar Dhawan: It was great feeling. We started off well and once we were in, we started playing more freely. We both decide who has to attack and who has to hang back. We always plan as to how to go about it. Very happy for Rohit (Sharma), he got a hundred after a long time and he got good support from Virat (Kohli).

20:59 (IST): That's that!India hammer Australia by 9 wickets to put series on level terms. Chasing 260 for a win, India reached the target in 43.3 overs with Rohit Sharma (141*) and Virat Kohli (100*) scoring a century each. The duo were involved in 186-run stand for the second wicket. Kohli scored the fastest hundred by an Indian, off 52 deliveries. Shikhar Dhawan fell short of hundred - he scored 95. This was also the highest run-chase by India and second highest overall.

20:36 (IST): Rohit and Kohli literally toying with the Aussie bowling attack. Bailey has no idea as to what field he must set to contain the batsmen.

20:20 (IST): STAT! This is the first time that top three have scored fifties for India in the same innings since December 2011. 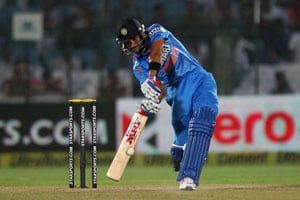 19:33 (IST): WICKET! Shikhar Dhawan falls short of his fourth hundred in ODIs. He was looking to play James Faulkner to third man but ended up getting a faint edge to keeper Brad Haddin. This also brings an end to India's highest opening stand against Australia. India 176/1 (26.1 overs), need 184 more to beat Australia 359/5. 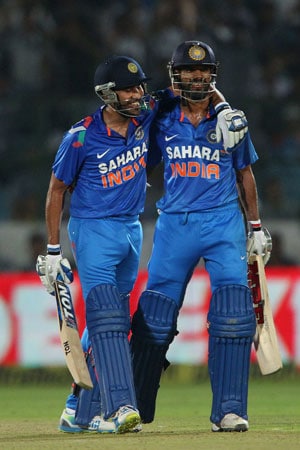 18:27 (IST): After a slow start and cautious start, India openers are now opening up and are not shy of hammering poor deliveries. India 69/0 (10 overs) against Australia 359/5. 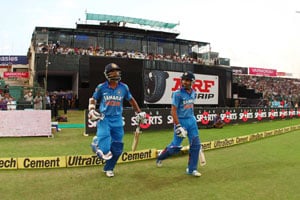 17:41 (IST): Indian openers walk out in the middle to chase 360. Mitchell Johnson to start proceedings for Australia.

17:26 (IST): STAT! This is the first occasion in the history of the ODIs when top-five batsmen have recorded fifty-plus. (Read more) 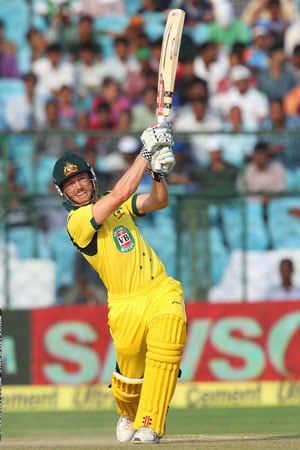 17:00 (IST): A fifty each by top five batsmen power Australia to 359/5 in their 50 overs against India. George Bailey top scored with 94 not out while Phillip Hughes (83), Shane Watson (59), Glenn Maxwell (53) and Aaron Finch (50) also scored a fifty each. For India, Vinay Kumar got two wicket while R Ashwin chipped in with one. Suresh Raina was good with his fielding efforts as he affected two dismissals. This is also the highest team total at Jaipur. Bailey has now passed 80 in four of his last five ODI innings. For the first time in the history of ODIs, the top five batsmen have recorded fifty-plus.

16:35 (IST): WICKET! Glenn Maxwell is run out. George Bailey plays it to long off and calls for an easy single, but Maxwell takes off for second run despite his skipper denying for another run. Australia 308/4 (45.5 overs). 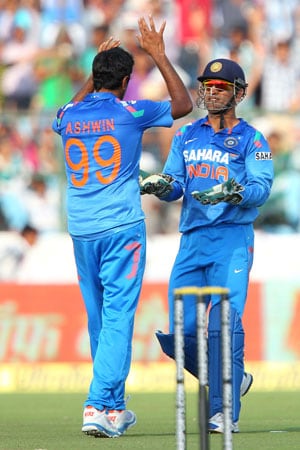 16:00 (IST): WICKET! R Ashwin gets the big wicket of Phillip Hughes. Hughes gets a faint outside edge to keeper MS Dhoni, who fumbles but manages to complete the catch in the end. Australia 212/3 (37.2 overs).

15:57 (IST): Phillip Hughes and skipper George Bailey have added 30 runs in as many deliveries. Batting powerplay is in progress. Australia 212/2 (37 overs). 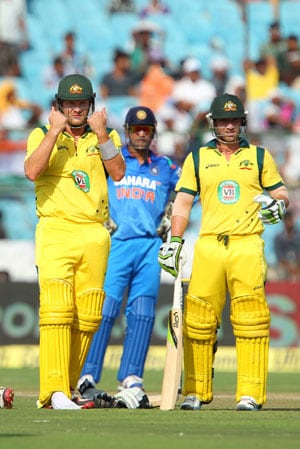 14:34 (IST): WICKET! India get the much-needed wicket, courtesy Suresh Raina's exceptional fielding. Aaron Finch falls just after scoring his second ODI fifty. He plays it to extra cover and calls for quick single. Raina picks the ball with one hand and throws it at the non strikers end. Australia 74/1 (15.2 overs).

13:50 (IST): Bhuvneshwar Kumar is not at his best today as he has been hammered for 18 runs in his three overs. Ishant Sharma is keeping things tight. Australia 23/0 (5 overs). 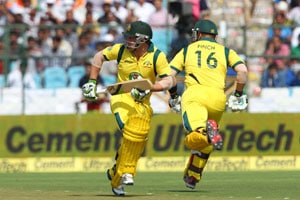 13:33 (IST): Aaron Finch gets off the mark with a single. Phillip Hughes scores first four of the match. Bhuvneshwar Kumar takes the new ball. Australia 6/0 (1 over).

MS Dhoni: We would have bowled first. There were negatives but also some positives from the last game. There will be some dew around later in the day. It is a long series so we will look to level the series and then look for the remaining five matches. We are playing the same side.

George Bailey: We will have another bat. It was a great all-round team effort. 300 today would be great and puts the pressure on the Indian batters. Some of the guys (Shane Watson and James Faulkner) were here before so they gave us their inputs. It is a great start to go 1-0 up we would like to make it 2-0. We are unchanged for today.

12:30 (IST): STAT! In the last five years, the average of India's bowlers have struggled against Australia. Each Australian wicket costs them 46.55 runs, which is their worst against any team. 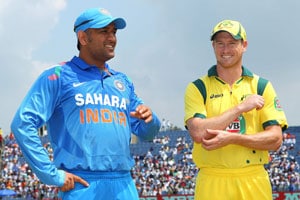 12:00 (IST): The pitch at the Sawai Man Singh Stadium is likely to provide the Australian pacers an ideal platform to press hard on the Indian batsmen, who are known to be uncomfortable against fast bowling as well as disconcerting bounce. Mitchell Johnson was particularly impressive in the first ODI, and added later that his tactic was to 'intimidate' the Indian batsmen.

11:50 (IST):The form of Ishant Sharma is a major cause of concern for the Indians. The lanky pacer went for 0/52 in four overs in the Twenty20 international followed by 0/56 in seven overs in the ODI in Pune. He has looked out of sorts over the past few months and failed to hit the right line and length as he delivered a lot of short balls. However, Ishant has found support with vice-captain Virat Kohli.

11:40 (IST): However, a determined Indian team still head into the tie as favourites. The Men in Blue will look to plug their batting and bowling loopholes at the Sawai Man Singh Stadium. A win for George Bailey and Co. will give Australia a run-away lead, which will be a shot in the arm considering they came into the series as underdogs. (Read full preview)

11:30 (IST): The first One-day International at Pune was a shock for the hosts. Outplayed by a gritty Australian side in all departments, India fell short by 72 runs. Yet, it is a long series and Mahendra Singh Dhoni's side are looking to bounce back with immediate effect.

Comments
Topics mentioned in this article
Sreesanth Cricket George Bailey MS Dhoni India Cricket Team Australia Cricket Team India vs Australia 2013-14
Get the latest updates on ICC T20 Worldcup 2022 and CWG 2022 check out the Schedule, Live Score and Medals Tally. Like us on Facebook or follow us on Twitter for more sports updates. You can also download the NDTV Cricket app for Android or iOS.