West Indies have dropped their vice-captain Brendan Nash and recalled Kirk Edwards for the second Test against India, which begins on June 28 in Barbados. 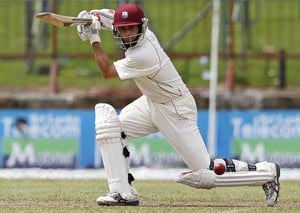 West Indies have dropped their vice-captain Brendan Nash and recalled Kirk Edwards for the second Test against India, which begins on June 28 in Barbados. Marlon Samuels, who missed the first Test in Jamaica, is likely to play in the middle order instead of Nash.

Nash came into the Test side without match practice and made 1 and 9 at Sabina Park, where West Indies lost by 63 runs. He has scored only 53 runs in his previous six innings and been dismissed in single digits five times. Ian Bishop, the former West Indies fast bowler and commentator, told ESPNcricinfo he wasn't surprised by the axing, though he thought Nash might have got one more chance.

"It's difficult for Brendan. It's been a like that for a while now. Nash doesn't play the ODIs and doesn't get much cricket in between," Bishop said. "I know he is a hard worker, very professional and will definitely go to the nets and work on his game. I suspect it will be Samuels who will play and not Edwards. Samuels has shown that he can make a contribution to this team. There might be also an option of playing five bowlers on that Barbados track. Time will tell."

In the absence of Chris Gayle, and now with the exit of Nash, the responsibility on Shivnarine Chanderpaul and Ramnaresh Sarwan increases. "Shiv has the ability ... I won't say he was careless in getting out in the Test match. One bounced on him and one hit a crack. He will go back and work hard and will lead this West Indies batting line-up. He is the one guy who can play the Dravid-type innings.

"Good teams have a senior core, who set a trend. Chanderpaul and Sarwan have to set that trend, particularly Sarwan. He is still relatively a young player and at the prime of his career."

MS Dhoni, the Indian captain, didn't want to comment on the continuing absence of Gayle. "I think that's a situation for the selectors to decide who they can pick for their team," he said. "I won't say this West Indian side is a weaker side. If you look at the talent they have in their top six or seven batsmen, then they are equally matched with the current Indian team you know, who all are over here".

Comments
Topics mentioned in this article Cricket India Cricket Team West Indies Cricket Team West Indies vs India 2011 Brendan Nash
Get the latest Indian Premier League 2020 news, check out the IPL 2020 schedule, Cricket live score . Like us on Facebook or follow us on Twitter for more IPL 2020 updates. You can also download the NDTV Cricket app for Android or iOS.
Related Articles

Coronavirus: Pat Cummins Says "Everyone Is Still Really Keen For IPL To Go Ahead"