Courtesy Tiwary's unbeaten 102 and a fine 75 from veteran Subhamoy Das, Bengal are now just 41 runs shy off getting the first innings lead. 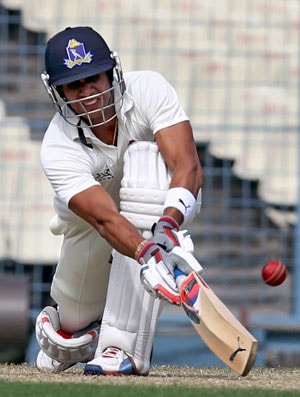 Bengal skipper Manoj Tiwary scored the 17th first-class century of his career as home team reached 220 for four in reply to Gujarat's first innings score of 260 in a third round Ranji Trophy encounter at the Eden Gardens.

Courtesy Tiwary's unbeaten 102 and a fine 75 from veteran Subhamoy Das, Bengal are now just 41 runs shy off getting the first innings lead.

The Tiwary-Subhamoy combination added 101 runs for the third wicket after Bengal lost their openers Partha Sarathi Bhattacharjee and Sreevats Goswami for scores of 3 and 2 respectively.

While Tiwary showed a lot of grit and patience during his 179-ball knock which had 13 boundaries, Subhamoy played an attacking innings during his 88-ball stay at the crease hitting 13 fours and a six. This was his second significant knock after scoring 95 in the first match against Rajasthan.

"There are a few cracks on the surface which are opening up. The spinners might come in very handy and we are looking at a lead around 200 to 250. I think Gujarat will face a lot of difficulty batting third on this track," skipper Tiwary told PTI at the end of day's play.

About his superb conversion rate having reached three-figure mark 17 times out of the 29 times that he had reached the score of 50.

"I was very annoyed with myself when I missed out on a century against England and threw it away against Rajasthan after getting 40 odd. I didn't want that to happen today and I hope to get an even bigger one tomorrow," a confident skipper said.

In the morning, Bengal's pace trio of Ashoke Dinda (3/73), Sourav Sarkar (4/60) and Shami Ahmed (2/59) polished off the remaining four Gujarat wickets for the addition of only 30 runs. Manpreet Juneja (48) and Rakesh Dhruv (41) were out quickly which set the tone for the day.