IPL 2013: We have to take some pressure off Gautam Gambhir, says Manvinder Bisla

Kallis and Morgan, who shared partnerships of 66 and 72 runs with him, respectively, helped Bisla along in his effort. "Kallis is a strong sportsperson. He was desperate to play and contribute. That's why he is one of the legends of the game," said Bisla, the awe in his voice palpable. 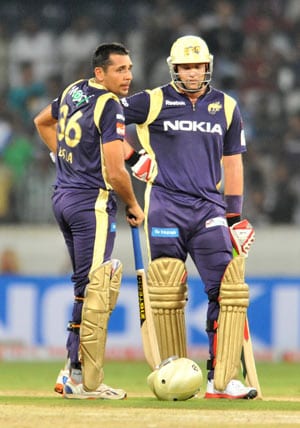 Manvinder Bisla had been fairly quiet in the Pepsi Indian Premier League 2013 till Friday (April 26) but his unbeaten 44-ball 51 against Kings XI Punjab, though not quite at par with the 48-ball 89 he scored in the final of the 2012 edition of the Indian Premier League, was a super effort. It anchored the Kolkata innings and, in the end, played a big part in his team ending their run of losses and getting their campaign back on track.

"It's nice to contribute to a win," said Bisla, who had been dropped from the team and returned only because of the injury to Manoj Tiwary. "I was dropped for two matches and I spent the time training a lot, batting a lot in the nets. I guess this was the result of that.

"It's not frustrating at all for someone like me to sit out. It's a great thing that I am playing the IPL at all, sharing dressing rooms with such great players. Someone like Brendon McCullum is not getting a chance - who am I? You just need to wait, work hard and bide your time."

With Bisla, as well as Jacques Kallis and Eoin Morgan, doing well with the bat, Kolkata's dependence on Gautam Gambhir to score most of the runs might be solved - if, of course, they can continue the good work. "Someone or the other has to score. Gautam is so consistent. The rest of us haven't batted well yet but if we do, we can take the pressure off Gautam gradually," said Bisla.

The win, Kolkata's third in eight games, didn't change their position on the points table, where they still sit in seventh place. "We had lost three games on the trot, so it was important for us to win and get two points," argued Bisla. "We have the belief that we can beat any team if we play well. You win if you play well, which we didn't before this game. There is nothing wrong with KKR. We will move up now."

Kallis and Morgan, who shared partnerships of 66 and 72 runs with him, respectively, helped Bisla along in his effort. "Kallis is a strong sportsperson. He was desperate to play and contribute. That's why he is one of the legends of the game," said Bisla, the awe in his voice palpable. "Morgs... I would love to do what he does and learn from him. He was very good today; he came in and changed the momentum with that match-winning innings. He took the pressure off me completely."

None of that, however, might have worked out if Mandeep Singh had caught Bisla or Bhargav Bhatt caught Morgan. Bisla admitted that luck was on Kolkata's side "for a change". "We won today and luck did play a part in it," he said. "If luck stays with us, good, but we have to play well if we want to win. That's more important."

With Tiwary ruled out for at least a week, Bisla should be in the playing XI for the matches against Chennai Super Kings and Mumbai Indians - Kolkata's next assignments. When Bisla went to Chennai the last time, it was for that IPL V final. This time, whether luck stays with him or not, he would want to repeat the heroics of that night. "I hope so, but that was last year; everything is different now," said Bisla, laughing.