West Indies' top four made half-centuries for only the third time in Tests, to quell fears over how the young batting line-up would fare in the absence of the injured Shivnarine Chanderpaul, their most experienced and reliable batsman. 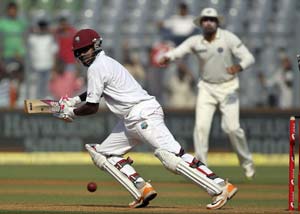 West Indies' top four made half-centuries for only the third time in Tests, to quell fears over how the young batting line-up would fare in the absence of the injured Shivnarine Chanderpaul, their most experienced and reliable batsman.

Adrian Barath and Kraigg Brathwaite gave West Indies their best start in five years, before R Ashwin briefly buoyed India's spirits by sending back both openers bat-pad in the course of a testing spell before tea. Kirk Edwards and Darren Bravo, though, added a century stand of their own to emphatically make it West Indies' day at the Wankhede Stadium. It was a pancake flat track but India made it even harder for their bowlers by shelling a couple of catches.

After losing the toss, MS Dhoni had hoped moisture in the pitch would help his quick bowlers early on, but both Ishant Sharma and debutant Varun Aaron - taking the place of the rested Umesh Yadav - got little sideways movement. Both bowlers consistently hit the 140kph mark, and though there were a couple of plays-and-misses, West Indies' young openers had few serious alarms.

Spin was introduced as early as the ninth over of the match, with Pragyan Ojha trying to exploit the West Indies' well-documented trouble against the turning ball. He got some extra bounce, and a few deliveries to spin, though not enough to impede West Indies' serene progress.

Both Barath and Brathwaite showcased a tight defence, and there were few flamboyant strokes, with the pair preferring to score mainly by guiding the loose deliveries on offer. The first caution-to-the-wind shot came from the usually stoic Brathwaite, who charged out and swatted Ashwin's second delivery over midwicket for four in the 19th over. Barath also caned Ashwin for a couple of boundaries a few overs before lunch, but he had been mostly measured in the rest of the session.

India's bowlers were tight early on in the second session, without managing a breakthrough. Ashwin induced an inside-edge from Brathwaite towards VVS Laxman at backward short leg, but the ball flew just wide of the fielder. Ishant steamed in and beat the bat without finding the edge, while Aaron followed up a sharp bouncer with an inviting fuller ball that Barath wafted at and nearly nicked. Barath chided himself for attempting that footwork-free drive, and on the other occasions when there was a momentary lapse of concentration, he and Brathwaite had a mid-pitch conference to egg each other on.

The runs weren't exactly coming in a torrent, but as the partnership stretched past 100, and past midway through the day, West Indies were completely in control. It was in the 51st over that India started clambering back into the game as Ashwin conjured some spin and bounce on the track. Brathwaite was put down by Laxman at backward short leg, and survived a big shout for lbw off the next ball, not offering a stroke to a ball turning in. In his next over, Ashwin struck, getting the ball to jump from a length, forcing an inside-edge from Barath on to the thigh pad that ended up as a simple catch for Dhoni. Soon after, Brathwaite followed, though his dismissal wasn't as clear cut - there might have been some glove as the ball spun past the bat and popped off the pad to short leg.

If there were worries in the West Indian camp that those two quick wickets were the harbinger of another familiar collapse, Edwards and Bravo eased the concerns. They provided a sample of their forceful strokeplay in the short period they were in the middle before tea, and continued their cavalier scoring after the interval as well. It's still early days in their career but their performances so far point towards an exciting long-term middle-order pairing for West Indies.

Ashwin continued to harry the batsmen with his variations, getting the odd delivery to jump sharply, but it was the other two spinners who produced India's chances in the final session. Virender Sehwag got an edge down the leg side off Edwards but Dhoni couldn't hang on to a tough chance, while Ojha was denied a wicket as Rahul Dravid put down a Bravo catch at first slip.

With the quicks not finding any reverse-swing, they were easy to handle with the old ball. Edwards' driving down the ground was exceptional, while Bravo relentlessly pinged the cover boundary as they went on to complete brisk half-centuries. On Wednesday, both will look to hurt India even more by kicking on to their hundreds.