India A's poor run of form at the Caribbean continued as they lost the first of the three-match unofficial ODI series against the West Indies A by two wickets in a last over thriller here. 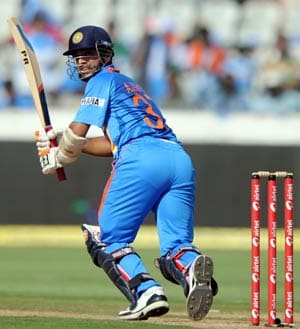 India A's poor run of form at the Caribbean continued as they lost the first of the three-match unofficial ODI series against the West Indies A by two wickets in a last over thriller here.

Opting to bat at the National Stadium, India A were all out for a meagre 190 in their allotted 50 overs with the West Indies skipper Veerasammy Permaul picking up four wickets.

Ajinkya Rahane top-scored with for India with a fine 58. The home side also kept losing wickets at regular intervals in their run chase and at one stage they were 158 for eight and it looked like India would pull off a sensational victory.

But tailenders Permaul and Nikita Miller put together an unbeaten 35-run stand for the ninth wicket to seal the match in the West Indies' favour with three balls to spare.

Earlier, Shikhar Dhawan (30) and Rahane gave India a decent start, while Manoj Tiwary (26) and Jalaj Saxena (22) also chipped in with some valuable runs but the Windies bowlers always kept the visitors in check by taking wickets at regular intervals.

Permaul, who returned to lead West Indies A after missing the two-match Twenty20 series, was the pick of the bowlers with figures of 4 for 33. Jason Holder (2 for 30) and Jonathan Carter (2 for 41) also contributed to the team's success.

In reply, West Indies lost Adrian Barath (5) early but Kieran Powell (25) and Kirk Edwards (33) steadied the boat. Thereafter, Carter, who hit a solid 39, and Assad Fudadin (26) always kept the hosts in the reach of achieving the target.

Even as Ashok Dinda (3 for 45) continued with his good form and was well supported by Bhuvneshwar Kumar (2 for 14) and part-time spinner Rohit Sharma (2 for 32), man-of-the-match Permaul (22 not out) and Miller (12 not out) held their nerves to register a thrilling victory for West Indies A.