Shakib Al Hasan bagged four wickets to set up Bangladesh's consolation eight-wicket victory over the West Indies in the third and final one-day international on Tuesday. 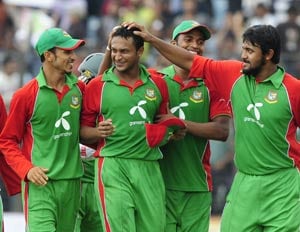 Shakib Al Hasan bagged four wickets to set up Bangladesh's consolation eight-wicket victory over the West Indies in the third and final one-day international on Tuesday.

The tourists were dismissed for their second-lowest total of 61 after being put in to bat, with left-arm spinner Shakib finishing with a career-best 4-16 off five disciplined overs.

The West Indies' lowest total in one-day internationals was 54 against South Africa in Cape Town in 2004.

Bangladesh, who had lost the first two one-dayers, achieved the small target with 30 overs to spare. Opener Tamim Iqbal top-scored with an unbeaten 36.

The West Indies, who had dismissed Bangladesh for 58 in a World Cup match in Dhaka in March, were at the receiving end this time as their innings lasted just 22 overs.

Their batting woes began in the 11th over when Shafiul had in-form Marlon Samuels caught by Suhrawadi Shuvo in the covers for his first victim. Samuels, who scored half-centuries in the last two one-dayers, could make just five.

Off-spinner Nasir, wicketless in his six one-dayers before this match, was on hat-trick when he bowled Powell and then held a return catch to dismiss hard-hitting Kieron Pollard off successive deliveries.

The West Indies made three changes from the side that won the second one-dayer by eight wickets in Dhaka last week.

The West Indies and Bangladesh will now play a two-Test series, starting in Chittagong on October 21.