Umesh Yadav: Journey of a police aspirant to WACA

Umesh Yadav has been a stand-out performer for India in what has otherwise been a dismal series for MS Dhoni and his team Down Under. On Saturday, he claimed his first five-wicket haul in Tests. 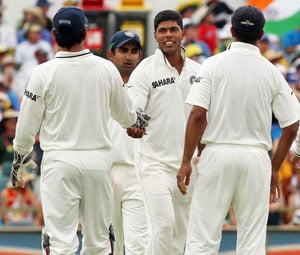 Umesh Yadav has been a stand-out performer for India in what has otherwise been a dismal series for MS Dhoni and his team Down Under. On Saturday, he claimed his first five-wicket haul in Tests.

The Vidarbha player was expected to play a crucial role on pace-friendly tracks in Australia.Â  And he has played to his potential in the series so far. With three wickets in the first innings at Melbourne and four in the next, he showed the ability to trouble Australian batsmen with nagging persistence.

The story was no different in Perth although he had received a fair share of hiding when David Warner was smashing his way through. Umesh though, eventually ended a 214-run partnership for the opening wicket and kept coming back for more. Even the likes of Ricky Ponting and Shaun Marsh had no answer to his bounce and pace as Australian middle order gave way to their tail.

Peter Siddle and Ryan Harris too showed their edgy abilities with the bat and surrendered to Umesh to become his fourth and fifth respectively.

Australian experts had already claimed Umesh Yadav to be a sensation. WACA bore witness to it on Friday as a player who always wanted to be a police officer, came in and knocked the wind out of a formidable bating line-up.

Son of a coal miner, Umesh has never been a stranger to hard-earned or well-fought glory. He decided to become a full time cricketer at an age of 19 and despite his comparatively late entry, rose dramatically.

The ability to bowl at over 140 kmph and not just intimidate batsman but to dismiss them as well, gave this 24-year old an entry into IPL in 2010 for the Delhi Daredevils.

The debut for the national side in ODIs came against Zimbabwe in 2010. Injuries to senior players played a role in Umesh getting a look-in. From here till the England tour in September last year, Umesh kept oscillating in and out of the team.

In England, he claimed four wickets and impressed all despite missing out on the final two ODIs due to an injury. His next came against West Indies at home in which he made his Test debut and finished with nine wickets.