As the Sydney Cricket Ground hosts its 100th Test, here is a quick look back at some of the most famous - and infamous - Tests at the venue. 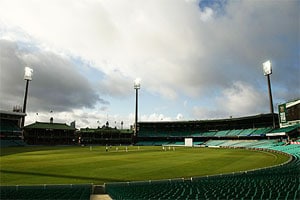 As the Sydney Cricket Ground hosts its 100th Test, here is a quick look back at some of the most famous - and infamous - Tests at the venue.

Ninety-four Tests have been played at the SCG since the 1884-85 battle between Hugh Massie's Australians and Arthur Shrewsbury's England. Only once has the result been any closer than the six-run victory the Australians achieved in this Test. And it was a ten-wicket match for "The Demon", Fred Spofforth, that secured Australia's win. England were left requiring 214 for victory and at 6 for 92, their hopes appeared dashed. But a 102-run stand between Wilf Flowers and Maurice Read brought them to within 20 runs of victory with four wickets in hand. Spofforth broke the partnership. When the last man came in, 15 were needed and, as described by Wisden, "the excitement round the ground and in the pavillion and stand was intense". With seven runs required, Spofforth had Flowers caught at point from a rising ball to finish the Test.

The 17th Test played at the SCG was described by Wisden in glowing terms. "A finer game has rarely been seen in Australia," the almanac said of the first Ashes Test of the 1903-04 season. England won by five wickets but the match is best known for the innings of Tip Foster, whose 287 remains comfortably the highest score on debut by a Test cricketer. The almanack reported that the latter part of Foster's innings was "described on all hands as something never surpassed". The timeless match went into the sixth day, England achieving their chase of 194 with five wickets in hand.

Australia entered the first Test of the 1932-33 Ashes without Don Bradman, unavailable due to illness, and with the challenge of handling England's Bodyline tactics in a Test for the first time. When Stan McCabe, 22, came to the wicket Australia were 3 for 82, and Harold Larwood and Bill Voce were bowling bumper after bumper with seven leg-side fielders. The journalist Ray Robinson wrote of McCabe: "Without a flinch, he stood up to the fearsome bowling; he hooked the short balls as if there were no danger to his ribs or skull, and as if he were unaware of the battalion of catch-awaiting fieldsmen, covered by outer scouts ready for the lofted ball". In four hours, he scored 187 not out. Later, McCabe said: "It was really an impulsive, senseless innings, a gamble that should not have been made but came off against all the odds".

The Bradman and Barnes show

The 405-run partnership between Sid Barnes and Don Bradman, set in the 1946-47 Ashes Test, still stands as the highest fifth-wicket stand in Test history, and the largest Test partnership at the SCG. Both men finished with 234. Barnes batted throughout the second day and until nearly 6pm on the third day. His innings was interrupted early by a fierce storm, and when play resumed conditions were difficult. But Barnes settled in for a long one. He batted for 649 minutes. Bradman's equivalent score took only 397 minutes, despite him batting without a runner, with a leg injury and sporting a pronounced limp. Together they batted England out of the Test, which Australia won by an innings and 33 runs.

England's first Ashes series win in Australia in 16 years was confirmed at the SCG in 1970-71, the seventh Test added after the Melbourne Test was washed out. England entered the Test with a 1-0 lead; Australia went in needing victory and with a new captain, Ian Chappell, after Bill Lawry became the first Australian captain to be sacked mid-series. The England captain, Ray Illingworth, led his players off the field as tempers became frayed following an altercation between a spectator and the fast bowler John Snow, who had hit Terry Jenner in the head with a bouncer. By his cricketing deeds, Illingworth led by example, top scoring in the first innings with 42 on a difficult pitch, and he took 3 for 39 as Australia failed to chase down 223 in the fourth innings.

In 1984-85, Clive Lloyd's West Indians entered the SCG Test without having lost a Test in 27 matches. Against a struggling Australia, who had won only one of their past 13 Tests, an end to that streak seemed unlikely. But on a turning Sydney pitch, West Indies were left to rue their decision to leave out their offspinner, Roger Harper, as Australia piled up 471 in the first innings, Kepler Wessels top scoring with 173. Australia's spin duo of Bob Holland and Murray Bennett ran through West Indies for 163 and, in the follow-on, 253. It was West Indies' first innings defeat since the 1960s, and the final Test appearance for Lloyd.

Australian spectators who sat in the stands at the SCG in 1992-93 knew they were witnessing a star in the making when Brian Lara, in his fifth Test, scored 277. It was the first of his 34 Test hundreds, and at the time the biggest Test score in Australia in nearly three decades. Lara gave one chance, low to Steve Waugh at gully on 172, and could not be removed until he called for a quick single and was sent back by Carl Hooper, failing to beat Damien Martyn's throw from cover. The batting of Lara was so sublime that Richie Richardson, who scored 109 at the other end, said afterwards: "I can hardly remember my hundred. It was difficult playing and being a spectator at the same time".

January 6, 1994 was one of the most remarkable days of Test cricket the SCG has seen. Australia were in a position from which they could not have expected to lose. Shane Warne had taken 12 wickets over the first four days, including 7 for 56 in the first innings as he showed his array of tricks - twice getting rid of his bunny Daryll Cullinan. At the start of the final morning, Australia were 4 for 63, their target of 117 a mere formality - or so it appeared. But in the first over of the fifth day, Allan Border offered no shot to Allan Donald and was bowled as the ball cut back in and took his off bail. From there, Donald and Fanie de Villiers, who took ten wickets for the match, ran through Australia's lower order. Damien Martyn was the last recognised batsman but was struggling to score, and from his 59th delivery, chased a wide half-volley and was caught at cover for 6. He would not play another Test for more than six years. The No.11 Glenn McGrath came to the crease with seven runs required and could do little but bunt a slower ball back to de Villiers for a return catch. Donald later described the match, which ended in a five-run win for South Africa, as the best Test he played in.

England won the dead rubber in 2002-03, but the Test was all about one man: Australia's captain, Steve Waugh. Under pressure after averaging less than 30 in his previous 16 Tests, Waugh, 37, knew the match could be his last. He was not ready to go. On the second day, Waugh worked his way to a century, but entered the final over of the day still needing five to reach triple figures. The offspinner Richard Dawson sent down three balls that were defended, and from the fourth, Waugh took three from a square drive. He was off strike. Two deliveries remained. His partner Adam Gilchrist found a single, and Waugh was left on strike on 98 with one ball left. He duly crunched Dawson through extra cover for a boundary, bringing roars from his home crowd and, no doubt, from many of the 2.1 million TV viewers in Australia who had tuned in. The moment has been etched in Australian Test folklore. It didn't lead to a series whitewash, but it did buy Waugh another year of Test cricket.

The last time Australia and India met at the SCG, in 2007-08, the Test was memorable for all the wrong reasons. There was the allegation that Harbhajan Singh racially abused Andrew Symonds; there was the perception that Australia were appealing excessively, and the series of umpiring mistakes that occurred along the way; there was doubt over whether catches had carried and there was India's belief that Australia's excessive celebrations in victory were boorish. The biggest of the umpiring blunders allowed Symonds a let-off on 30, when Steve Bucknor called not out for what Symonds later admitted was a thick edge behind. He went on to make 162 not out. The match finished late on the fifth day, when Michael Clarke took three wickets in an over to secure victory for Australia when a draw looked inevitable. After the Test, India's captain Anil Kumble said that "only one team was playing with the spirit of the game". It was the low point in a series full of tension.

Comments
Topics mentioned in this article
Sydney Cricket Ground (SCG), Sydney Australia Cricket Team Cricket India Cricket Team Australia vs India 2011-12
Get the latest updates on IPL 2021, IPL Points Table , IPL Schedule 2021 , live score . Like us on Facebook or follow us on Twitter for more sports updates. You can also download the NDTV Cricket app for Android or iOS.