Sri Lanka thump Australia for first win of the series

A rejuvenated Sri Lanka excelled with the ball and in the field to cut down Australia's batting and then raced impudently to their rain-reduced target for an eight-wicket victory and a bonus point in a lopsided encounter at the SCG. 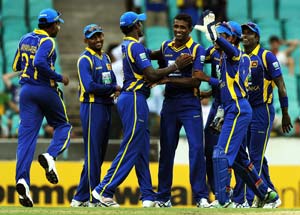 A rejuvenated Sri Lanka excelled with the ball and in the field to cut down Australia's batting and then raced impudently to their rain-reduced target for an eight-wicket victory and a bonus point in a lopsided encounter at the SCG.

Despite the best efforts of David Hussey, the hosts were rumbled out for 158, their lowest at the ground since 1997 and fourth-lowest in all ODIs in Sydney, in a match reduced to 41 overs-per-side by a two-hour rain delay that took place when Australia were a punch-drunk 6 for 88. Tillakaratne Dilshan and the captain Mahela Jayawardena then removed all doubt about the contest with a stand of 74 inside 12 overs.

Jayawardene was still there when the winning runs were collected with 16.5 overs to spare, surprising a crowd of 22,365 and pushing Sri Lanka back into finals contention with seven points after four matches. India lead the table on 10, while a suddenly wobbly Australia have nine.

It was an unhappy return to captaincy for Ricky Ponting, who could rouse neither himself from an ODI batting slumber nor his team from the flat patch they have slipped into following a successful Test summer. Ponting is likely to still have the job on Sunday against India at the Gabba as Michael Clarke struggles to recover from a hamstring strain. The hosts' batting was inattentive and wasteful in the afternoon, and there was precious little spark with the ball or in the field, thus maintaining the unsettling form line that began in Adelaide on Sunday.

Farveez Maharoof bowled intelligently for the visitors on his recall to the team, while Lasith Malinga struck a key early blow by defeating David Warner with a slower ball. Thisara Perera engineered two run-outs and claimed two wickets at the bowling crease, and Angelo Mathews maintained his strong form in this series by accounting for Michael Hussey.

David Hussey was left to salvage something from the innings, though he was fortunate to survive a dropped chance from Malinga at third man when on eight. After the rain cleared he went on to a meritorious 58, maintaining his strongest summer yet for Australia. His efforts ensured some kind of chase for Sri Lanka, a prospect that looked grim at 8 for 104.

Given a chance to add a sixth win from their last eight matches at the ground, Dilshan and Jayawardena wasted little time setting about the target. Jayawardena pinged a perfect off-drive in Mitchell Starc's first over, and Dilshan added a flatly-pulled six in the left-armer's second.

Brett Lee's return to the team after a broken toe was rushed, and Dilshan made him pay for it by cracking a hat-trick of boundaries through the leg side as the bowler dropped short. Dilshan edged Clint McKay to slip when still five short of his half century, but by that point nearly half the target had been swallowed up in quick time and the rest of the runs were collected without fuss.

Ponting was happy to bat first on what looked a pitch for batting, but soon the clouds had closed in on both the ground and the Australian batsmen. Warner struck a pair of crisp boundaries but struggled to read Malinga's changes of pace, and ultimately lobbed a catch to mid-on when trying to get down the pitch.

Maharoof took note of Malinga's craftiness, and used a similar ruse to account for Ponting. Nicely disguised, a slower ball had Ponting too far into the stroke to avoid pushing back a simple return catch, and departing for another slim score this series.

Matthew Wade's demise occurred after Perera swooped from short cover to turn a possible single into a horrid run-out, the wicketkeeper and Peter Forrest both at the same end before Wade elected to sacrifice his wicket. Sri Lanka's alertness in the field had been apparent, it was justly rewarded here.

Michael Hussey struck one six from Mathews but next ball he fenced at a delivery too close to his body for the shot and edged behind. Forrest fiddled at Maharoof's exemplary length and line to offer a catch to slip, and Christian shuffled across to be lbw to Perera. The rain then arrived, leaving Australia in a parlous position.

Two hours of showers swept across the ground, reducing the allotted number of overs. The hosts had only 15 to bat when they resumed, and soon lost another two wickets. McKay was fooled by Rangana Herath's straight ball, then Lee was the victim of another Perera swoop, this time for a direct hit from wide mid-off.

David Hussey was in dire need of any kind of support, and for 49 runs he received it from Starc. Hussey cracked boundaries through point, midwicket and down the ground, but on 33 was again reprieved, this time when Mathews shelled a difficult chance at short cover. Perera ultimately claimed Hussey, and Starc was run out to complete a most unsatisfactory innings for the hosts. Things would only get worse as day gave way to night.