Chamara Kapugedera, the middle-order batsman, has been named as a replacement for one of the three injured allrounders in the Sri Lanka squad that qualified for the finals of the Commonwealth Bank tri-series. 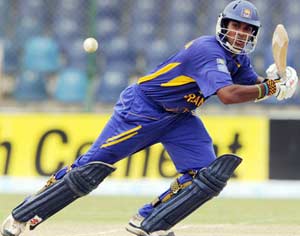 Chamara Kapugedera, the middle-order batsman, has been named as a replacement for one of the three injured allrounders in the Sri Lanka squad that qualified for the finals of the Commonwealth Bank tri-series.

Which of the injured players - Farveez Maharoof, Angleo Mathews and Thisara Perara - is being replaced, has not yet been decided. Sri Lanka will play Australia in the best-of-three final from Sunday, in Brisbane.

Sri Lanka Cricket secretary Nishantha Ranatunga said that the team management, in consultation with the national selectors, had opted for a batsman. He will fly to Brisbane on Friday night. "The request was for a batsman for the No. 6 position and Kapugedera was picked," Ranatunga said. "The team management will take a decision tonight, on which of these injured players will be sent home."

Kapugedera, who has not represented Sri Lanka since the World Cup final last April, had shown some form for Nondescripts Cricket Club in the ongoing domestic first-class competition, the Premier League Tier A tournament, scoring two hundreds in his previous four games. The pick of his innings was a 168-ball 158 in the first week of February, which came against defending champions Bloomfield Cricket and Athletic Club.

Sri Lanka entered the final league match - a must-win game for them - without the services of Farveez Maharoof, who picked up a back complaint during Tuesday's game against India in Hobart. Then, during the Australia chase, Thisara Perara and Angelo Mathews went off the field with injuries. Perera bowled only five balls before walking off with a back problem and Mathews was forced off with a calf injury.