India captain Mahendra Singh Dhoni won over the strong Indian community here with a typically lighthearted speech at a gathering at the Indian High Commission on Saturday. 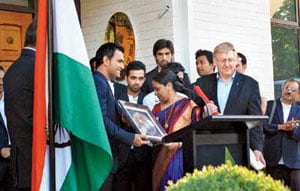 India captain Mahendra Singh Dhoni won over the strong Indian community here with a typically lighthearted speech at a gathering at the Indian High Commission on Saturday. It would be safe to state that the Indians here get more excited to share space with 'the rockstars' than the fans back home. After all, they get the opportunity once in four years. "We've waited for this moment for so long. This is a big day for us," said Rakesh, an Indian industrialist settled here for three decades.

Dhoni was introduced as "an icon of young India" by Sujatha Singh, the High Commissioner of India in Australia, in a rousing speech that even paid tribute to the late great Mansur Ali Khan Pataudi. "A lot has happened since India's last tour here (in 2007-08). The India-Australia relations have got a lot stronger.

The Nawab is back to the pavilion. We both (India and Australia) lost to the common enemy, England. Both Harbhajan Singh and Andrew Symonds are back in India. While Symonds is in the Big Boss House, Harbhajan is outside of it. But even if you put them together, they would be mates since they play in the same IPL side. I can proudly say that cricket and diplomatic relations between India and Australia are stronger than ever," she said.

As expected, Dhoni stole the show. "After returning the favour to the common enemy (in the one-day series at home), we were playing the West Indies, and I had some time off in the latter part of the series. I was sitting at home and watching television.

Dhoni continued: "More often than not, you watch some really strong advertisements in the lead-up to an India-Australia series. The advertisement said: 'It is winter out there, and summer out here, so get ready to feel the heat down under.' I took it very seriously. I didn't pack a single jacket only to realise that it's pretty cold here. What they meant was that it was related to cricket, and not the weather." At this point, the guests, in awe of Dhoni, couldn't control their laughter.

The 30-year-old was hoping that the younger guys would 'stir the pot' in the absence of Harbhajan and Symonds in the forthcoming Test series. "The India-Australia series is always a hyped one. There's always a lot of chit-chat going around. We can't stop the Aussies from speaking. At times, we also reply to them, give it back to them. This time though, we will miss Harbhajan and Symonds. Hopefully, we'll have youngsters who can fill the space," he said.

Comments
Topics mentioned in this article
Cricket MS Dhoni Australia Cricket Team India Cricket Team Andrew Symonds Australia vs India 2011-12
Get the latest updates on IPL 2021, IPL Points Table , IPL Schedule 2021 , live score . Like us on Facebook or follow us on Twitter for more sports updates. You can also download the NDTV Cricket app for Android or iOS.