Sri Lankan captain Mahela Jayawardene rued the lack of partnerships upfront as they lost to Australia by 16 runs in the last and decisive final of the cricket tri-series here on Thursday. 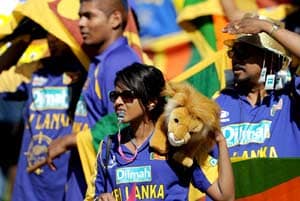 Sri Lankan captain Mahela Jayawardene rued the lack of partnerships upfront as they lost to Australia by 16 runs in the last and decisive final of the cricket tri-series here on Thursday.

"Initially if we were given 231 we would have taken it. They put a lot of pressure on us, we fought well but the lack of partnerships upfront did us. We could not execute a good game plan," Jayawardene said after the match.

He, though, hailed his unit for putting up a great show Down Under and said it was a learning experience for some of the younger boys in the squad, as the team looked to rebuild for the next World Cup.

"Very proud of the boys against two quality teams (Australia and India). The objective is to rebuild for the next four years and we've learnt a lot and I'm proud of the youngsters," he said.

Opting to field Sri Lanka were able to restrict Australia to a moderate total of 231, after David Warner and Matthew Wade put on 79 runs for the first wicket.

But lack of application by the Sri Lankan batsmen in the initial overs saw them lose four important wickets in the first powerplay, which played a crucial role in their debacle.

Australian captain Michael Clarke, who was forced out of this match because of hamstring injury, lavished praise on his bowlers, whom he otherwise thought were a bit erratic with their line and length in the previous matches.

"Much better team without me I reckon. The boys were very good with the ball. I was a bit harsh on them in the previous matches but they did really well today. All the boys have a few more grey hairs," he said.