Indian skipper Mahendra Singh Dhoni has a jinxed man in his corner and it's none other than coach Duncan Fletcher. 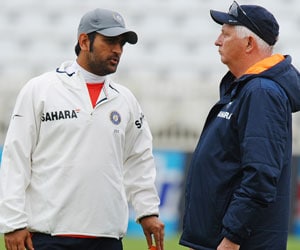 Indian skipper Mahendra Singh Dhoni has a jinxed man in his corner and it's none other than coach Duncan Fletcher.

For all the praise and admiration the Zimbabwean gets in the cricketing world for his technical wisdom, his record in Australia is as abysmal as it gets.

Fletcher, while he was coach of England and now India, has lost 10 of the 11 Tests he has been involved in Australia.

In 2002-03, when Fletcher brought over an England team to Australia, his team was drubbed 4-1. The 2005 visit Down Under was worse as the hosts whitewashed the English side 5-0.

Fletcher's overseas record with India is similarly dismal. He began in West Indies where India won 1-0 but lost countless admirers for refusing to chase down 85 runs off 15 overs for victory, with seven wickets in hand, to win the final Test in Dominica.

The painful memories of England are too vivid when India were humiliated 4-0 by the hosts this summer and the one-day series was no better where another clean sweep was in store for the tourists.

The loss in Melbourne makes it five successive losses for India in last five Tests and there isn't any sign that the batsmen are any better at facing the swing deliveries than they were in England.

Australia's batting camp to counter swing was a clear signal that the tourists would be served with hostile batting conditions where seam and swing would be the king.