If you didn't allow yourself to be distracted by the chatter about the Decision Review System, a far better story lay there before you: Test cricket in its finest suit. The MCG has provided the pitch and the stage to two less-than-perfect teams to weave together the perfect narrative that has kept everyone -- batsmen, bowler, and spectators--interested. 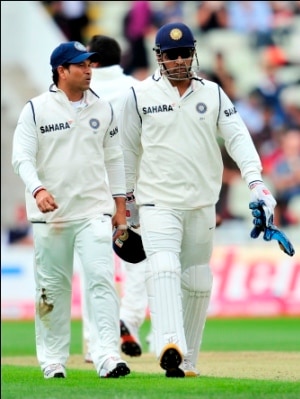 If you didn't allow yourself to be distracted by the chatter about the Decision Review System, a far better story lay there before you: Test cricket in its finest suit. The MCG has provided the pitch and the stage to two less-than-perfect teams to weave together the perfect narrative that has kept everyone -- batsmen, bowler, and spectators--interested.

The fall-of-wickets column suggests an awkward batting surface. The truth is that the pitch has done Test cricket credit: it has consistently rewarded good bowling, and skillful batsmen have found the way to score runs. At the most, there has been the hint of uneven bounce, but hardly any treachery. Batsmen have managed to drive on the up, down the ground, cut and pull and defend comfortably, but at the same time, they haven't been able to take the runs for granted; they have had to be vigilant and resourceful. Cricket is at its most satisfying when both runs and wickets feel earned and the large crowds that have turned up on the each day have been handsomely rewarded.

When Sachin Tendulkar found his top game yesterday, the ball hurried through the turf as if it had friends waiting beyond the ropes, but as has been the case throughout the match, the wicket-taking ball was lurking in the corner. Peter Siddle might have cost the MCG some serious gate money on the third day by finding Tendulkar's stumps in the dying moments on Tuesday, but he burst the match open dramatically.

Though the scorecard didn't do full justice to Australia's effort, each of their quick bowlers stood guilty of bowling at least one poor spell. How well did they make up for it today? Leave aside a poor spell, there was hardly a poor ball all morning. Rahul Dravid, who was fortunate to survive yesterday, received what must count as an overnight batsman's worst nightmare: the dream ball from the right-arm swing bowler, in the first over of the morning. Ben Hilfenhaus landed the ball on the middle stump on the perfect length, and it moved just enough to evade the bat and hit off stump. It was fitting that two special balls accounted for Test cricket's most prolific run-getters.

Perhaps it was fortuitous for Australia that Peter Siddle, indifferent in the first spell, found a cause to rouse himself after shattering Dravid's stumps with a no-ball. His sense of grievance - though he had no one to blame but himself - became the rallying point for Australia's comeback and they managed to carry the intensity into the following day. It could be argued that India's lower middle order surrendered their wickets through tentative strokes but the truth was that Australia's quick men were relentless.

VVS Laxman was kept scoreless for 19 balls; Virat Kohli found some release against Nathan Lyon, but was given no space by the fast men; MS Dhoni fell to a familiar trap, driving at a fullish and swinging ball outside offstump. For India, the MCG has become the place for spectacular first-innings collapses, nothing more dramatic and sudden than the meltdown in 2003 when they slumped from 1 for 278 to 366 all out after Virender Sehwag had belted 195 before tea. In 2007, they lost 7 for 76 and the tally read 8 for 68 today.

But unlike those two occasions, the bowlers have kept them in the contest in this match. They have learnt from mistakes in the first innings when they bowled a yard shorter, taking leg-before and bowled out of the equation and while they beat the bat often enough, they quickly absorbed the lesson from Australia that it's the full length that often finds the edge. The home side's top order contributed with poor and indecisive strokes, but each of the first three dismissals was brought about by a ball that landed closer to the batsman.

And for the first times in many seasons, India forged an attack with no obvious weak links. After Umesh Yadav, who grows more impressive by the innings, and Zaheer Khan had delivered splendid opening spells, Ishant Sharma, unlike many times in the recent past, didn't serve as the release bowler. And R Ashwin, though not as threatening as the quick men, didn't serve up singles on demand. Even when Ricky Ponting and Micheal Hussey were mounting a stand, the ball beat the bat often enough. It is a cliche that a wicket is always a ball way, but all through today, it was always a tangible possibility.

Reverse swing or not, Zaheer Khan has mastered the art of taking wickets with the old ball, and like in the first innings, he delivered two wickets in the last sessions to keep this fantastic Test in the balance.

But expect this match to keep turning. Michael Hussey, who has managed to taste the vagaries of fate over the course of three days - done in by an umpiring error in the first innings, survived an appeal that would gone against him had DRS been used, and benefited from a spilled catch at slip - has kept his own place and his team in contest with a performance that has typified his career.

That it was nearly fifty years ago that a 200-plus chase was achieved at the MCG, should point to a position of ascendancy for Australia. India have mounted their best chases in the last four years, and it was only a few Tests ago that South Africa casually chased down 250 after 23 wickets had fallen the previous day Cape Town. If you have the chance, be there at the MCG.

Comments
Topics mentioned in this article
Australia Cricket Team Cricket India Cricket Team Melbourne Cricket Ground Australia vs India 2011-12
Get the latest updates on IPL 2021, IPL Points Table , IPL Schedule 2021 , live score . Like us on Facebook or follow us on Twitter for more sports updates. You can also download the NDTV Cricket app for Android or iOS.