Domineering. There is no other word for it. Australia's innings and 68-run victory over India at the SCG was the most comprehensive mauling meted out to an opponent of note in more than two years, and the hammer blow in a series that had begun with the visitors considered favourites. How strange and distant that seems now. Michael Clarke's team are some distance from the finished article, but they will not remain so for long if performances of this completeness can be delivered on a regular basis against the teams sitting above them in the ICC's Test rankings. 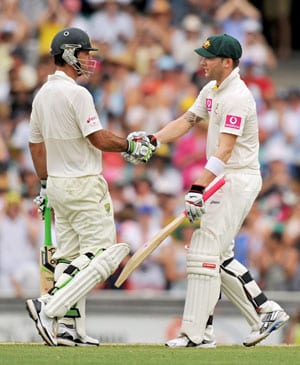 Domineering. There is no other word for it. Australia's innings and 68-run victory over India at the SCG was the most comprehensive mauling meted out to an opponent of note in more than two years, and the hammer blow in a series that had begun with the visitors considered favourites. How strange and distant that seems now. Michael Clarke's team are some distance from the finished article, but they will not remain so for long if performances of this completeness can be delivered on a regular basis against the teams sitting above them in the ICC's Test rankings.

Over the past year, Clarke's men had shown themselves capable of dizzy heights and depressing lows, peaking in Galle, Johannesburg and Melbourne but slipping away alarmingly in Cape Town and Hobart. They entered the Sydney Test having not won more than one match in a Test series since early 2010, a firm marker of how inconsistent their displays had been. This was acknowledged clearly by Clarke, who is part of a leadership and management axis being marked closely on results by Pat Howard, the Argus review-installed team performance manager.

But, as anyone who tried to play Shane Warne's flipper more than once can attest, foreknowledge does not necessarily make the task any easier. Awareness must be followed up with strong planning and sustained performance, something so elusive either side of the captaincy handover from Ponting to Clarke. Some level of inconsistency was to be expected, but the extremes of Clarke's first three Test series as captain could not be repeated, as that would undermine the foundations being put in place for a settled team to prosper over the remainder of the Australian summer and beyond.

Knowing this, Clarke advocated and received an unchanged team for Sydney, starting 2012 on a note of stability and reassurance for the players under him. The bowlers especially have benefited from greater cohesion and understanding of their roles, under the vigilant bowling coach Craig McDermott. It was they who set the match up for the winning with speed, swing and bounce on the first day, perforating India's batting with the full length of McDermott's preference, then boring into the tail with short-pitched relish.

So much has been said about Clarke's innings, which towers over all other individual efforts in this match. But in the context of the Test it was less important than the fact it spanned two partnerships as sturdy as granite, 288 with Ponting then and unbeaten 334 with Michael Hussey. Like the combinations provided by the bowlers, it is the runs scored in such unions, so much more than a lone hand, that define a match. Clarke could not have flown so high without Ponting and Hussey, just as James Pattinson could not have have ripped out four of the top five visiting batsmen without Peter Siddle and Ben Hilfenhaus offering support on day one.

The declaration arrived halfway through the scheduled five days, preventing Clarke form going on to greater personal glory but allowing maximum time for his team to bowl India out. Having stood in the field for more than a few long days against the twirling bats of Sachin Tendulkar and VVS Laxman, Clarke knew he may need all of the two and a half days at his disposal. He was rewarded for his decision with two wickets on day three, a tally that could have been three with a safer pair of gloves from his lieutenant Brad Haddin.

Still, Tendulkar and Laxman remained to be dislodged, and after Gautam Gambhir's belligerent 83 they crafted the foundations of what may have become a significant union. Nathan Lyon created a few half-chances and had one loud lbw appeal turned down but, bowling down-breeze, he was unable to find a way past two batsmen who have clattered many a spinner over the years. So it was left to Clarke to have a go, and soon after lunch he made the crucial breakthrough, coaxing an edge from Tendulkar as he yet again became tentative on the outskirts of his 100th international century. Haddin's gloves provided an accidental assist to help Hussey claim the catch, and the celebrations were in keeping with the significance of the moment as well as the golden touch of Clarke in this match. His field placements were adroit as ever, removing both Virender Sehwag and Gambhir with men neatly placed at point - a position so many international teams have taken to posting deep as a matter of course.

Tendulkar's wicket opened up one end to the second new ball, though it was not the new man Virat Kohli who fell first. Ben Hilfenhaus benefitted from his off-season efforts to use more of the crease, angling the ball subtly into Laxman then bending it away to flick the top of the stumps, a delivery every bit as good as the one that accounted for Rahul Dravid in the first over of day three at the MCG. Save for the resistance of R Ashwin, the rest followed meekly. It was a case of one team learning to impose itself by beating another that has seemingly become all too used to the motions of defeat.

India's present failings are wide-ranging, but their sequence of six consecutive away defeats have come against the best team in the world, England, and another that is starting to look like it might be in a position to challenge England by the time the 2013 Ashes roll by. At the head of that team, in all probability, will be Clarke, who has put his leadership beyond all doubt by completing one of the most outstanding Test matches from a leader.

This is not to say Australia are without flaws. The top order lacks experience and rhythm, Haddin's standing as a leader in the dressing-room is being weakened by flawed glovework and flighty batting, and Nathan Lyon took only one wicket for the match, albeit against gifted players of spin. Ahead lies Perth, where Ryan Harris will be a likely inclusion for a pace quartet that could do truly fearful damage to Indian minds already filled with self-doubt.

Many members of this Australian team, both players and support staff, spoke of the Boxing Day Test as the best victory they had been a part of. Low-scoring and fluctuating, it provided the exhilaration and relief of a struggle won over a higher-ranked opponent in front of an enormous crowd. A week later and those same players may have to revise that declaration. The SCG's 100th Test did not turn out to be the contest yearned for by purists, but there was plenty of satisfaction to be drawn from the sight of a domineering Australia, led by a natural captain. It has been a while.

Comments
Topics mentioned in this article
Cricket India Cricket Team Australia Cricket Team Michael Clarke Australia vs India 2011-12
Get the latest updates on IPL 2021, IPL Points Table , IPL Schedule 2021 , live score . Like us on Facebook or follow us on Twitter for more sports updates. You can also download the NDTV Cricket app for Android or iOS.