How Kumble's team bounced back in Perth in 2008

Though most experts have written off India's chances of making a comeback in the series after crushing defeats in the Melbourne and Sydney Tests, it is not the first time Team India has been in this situation Down Under. 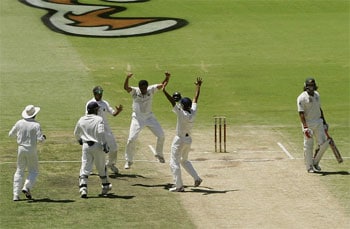 Though most experts have written off India's chances of making a comeback in the series after crushing defeats in the Melbourne and Sydney Tests, it is not the first time Team India has been in this situation Down Under. During India's last tour to Australia in 2007-08, Anil Kumble's men clinched an unexpected win at Perth after being 0-2 down in the four-Test series.

Chetan Chauhan, the team's tour manager for that series, shares some insights with MiD DAY on how they achieved the incredible victory at the Western Australia Cricket Association (WACA) ground to make it one of the most famous comebacks in the history of Indian cricket: "We had to instill belief in the team that we can win at Perth (where India had never triumphed before).

We can still make a comeback in the series...we needn't be scared of the green top at the WACA. We told the boys that we would have won in Sydney had those dubious decisions gone in our favour. In fact, the Monkeygate controversy and those controversial decisions charged up the team for the Perth game. They were determined to crush the Aussies," said Chauhan, who also suggested a few adjustments for the batsmen to suit the conditions.

"We also decided to adopt an aggressive strategy to counter the Aussies. If they abuse, you abuse too; if they swear by you, then you also do the same. It was tit-for-tat," added the 64-year-old. However, it was Kumble's captaincy that made the biggest difference in winning the Perth Test, according to the former opener, who opened the batting for India on the 1977-78 and 1980-81 tours Down Under.

"Kumble was a thinking captain and a great motivator. He used to constantly talk to his players. There was no communication gap. He urged to the entire playing XI to contribute in every match. He was a taskmaster and would speak his mind," he said.

Chauhan reckoned Dhoni should follow suit. "Dhoni has to speak to his players constantly. You have to guide the youngsters especially guys like Umesh Yadav. He has to lift the body language of the players. He cannot adopt a defensive strategy against the Australians. You cannot think of defending against great batsmen like Michael Clarke and Ricky Ponting. You have to attack," he signed off.

Comments
Topics mentioned in this article
Cricket India Cricket Team Australia Cricket Team Anil Kumble Australia vs India 2011-12
Get the latest updates on IPL 2021, IPL Points Table , IPL Schedule 2021 , live score . Like us on Facebook or follow us on Twitter for more sports updates. You can also download the NDTV Cricket app for Android or iOS.