Brad Haddin Had Thought of Quitting Cricket Due to Exhaustion

Battling injuries and weight-related issues in the past, Australian wicket-keeper Brad Haddin had thought of hanging up his boots. 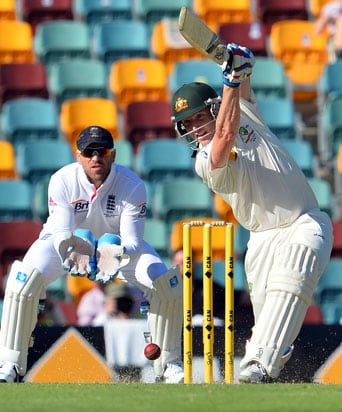 He could be leading Australia against India in the upcoming Test series if Michael Clarke fails to recover in time from injury but Brad Haddin himself felt so drained physically and mentally not too long back that he contemplated quitting cricket.

In a 'Daily Telegraph' report quoting rugby player Tom Carter, who mentored Haddin and helped him get over the tough phase, it has been revealed that the wicketkeeper-batsman was on the verge of bidding adieu to the game after battling injuries and weight issues.

"He approached me after the T20 World Cup (in March) where he obviously had an incredible comeback through the Ashes and he just said, 'look, I feel really tired and I'm just unsure about where to go,'" said Carter, Haddin's friend for the last 10 years.

"He spoke to me about the difficulty of after the Ashes and the emotional and physical let-down of how hard it's to want to keep climbing the mountain.

Carter said the 37-year-old managed to gather himself and come back.

"And he just really picked up the bit there and ran with it. We've been working the last couple of weeks to try and help him get back for the Test and hopefully he becomes the 45th Test captain for Australia.

"I feel very fortunate that someone at 37 who has achieved so much in the game was so willing to try make thyself so much better again. He's really determined to reimpose himself," he said.

Haddin's self doubt reemerged during the recent series against Pakistan in the UAE where he suffered a shoulder injury.

"There was self-doubt about whether he'd be right. Again it was similar to post the Twenty20 World Cup. He obviously would have been disappointed with how his form was over there," said Carter.

"The bruising and the soreness of his shoulder was horrible, but the one thing from Brad is he never shows you pain. It just rolls off him and it was never going to be an excuse for him not to be ready," he added.

India and Australia will begin their four-Test series in Brisbane from December 4.

Comments
Topics mentioned in this article
Australia Cricket Team India Cricket Team Brad Haddin Australia vs India 2011-12 Cricket
Get the latest updates on India vs England Series, India vs England , live score and IPL 2021 Auction . Like us on Facebook or follow us on Twitter for more sports updates. You can also download the NDTV Cricket app for Android or iOS.