Hilfenhaus' guile and the Indians' dance

Wickets or maidens, top order or tailenders, with new ball or old, Australian pacer Ben Hilfenhaus is a nightmare which just refuses to go away for the Indians in the ongoing Test series. 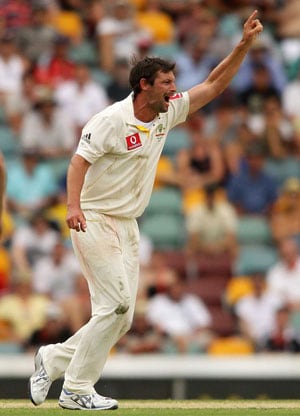 Wickets or maidens, top order or tailenders, with new ball or old, Australian pacer Ben Hilfenhaus is a nightmare which just refuses to go away for the Indians in the ongoing Test series.

If his hustling out the tail in India's second innings at WACA is still fresh, it's worth noting 14 of his 23 wickets are of India's top seven batsmen.

The Tasmanian has hurt the otherwise rampant opener Virender Sehwag most damningly as the India has struggled to lay his bat on his rapid outswingers.

From 88 balls faced, there's just one four to show, that too an unintended squirt through the slip cordon in the second dig in Perth. Three of his dismissals are the handiwork of Hilfenhaus.

The other opener Gautam Gambhir has no better tales to tell. He too was without a four against "Hilfy" till the WACA Test.

Hopping on the off-stump, drawn like magnet to deliveries leaving him late, Gambhir has managed a mere 27 runs from 131 balls faced and twice he has fallen to Hilfenhaus.

There hasn't been a Test in the series when one or the other opener hasn't fallen to Hilfenhaus. India's most prolific opening pair ever has managed no better than 24 in any of the six innings.

VVS Laxman's reputation similarly lies in tatters. Inarguably the batsman who has hurt Australia the most in the last dozen years at critical junctures, Laxman has been reduced to a doddering wreck by Hilfenhaus.

Laxman's wristy flicks and steers have not amounted to more than 12 runs from 59 balls for two dismissals against Hilfenhaus. His latest, a duck in the second innings at Perth, has almost brought his career to a full-stop.

Virat Kohli revived his career with a bright 75 in Perth. His bigger triumph was to withstand Hilfenhaus' probing deliveries.

Luck too aided him for a few off-cutters all but bowled him at times. But he has scored no better than 30 runs from 70 balls faced against Hilfenhaus. He too has twice fallen to the 27-year-old fast bowler.

Indian skipper Mahendra Singh Dhoni and Rahul Dravid have been similar at the receiving ends. Dhoni has been dismissed thrice and Dravid twice by the indefatigable pacer.

"He usually bowls out-swingers but a delivery of his which comes with a round-arm action cuts back at right-handers. It's particularly tough on left-handers," said one of India's top six batsmen.

"It's also no help that he bowls eight-nine overs at a stretch, with or into the wind, allowing the other fast bowlers to rotate from the other end," said the batsman.

Hilfenhaus comes so rapidly at the batsmen that it takes them by surprise. Gambhir barely settles in his stance before Hilfenhaus is almost in his delivery stride.

The left-hander, on more than one occasion, pulled away in Melbourne so quickly did Hilfenhaus advance on him. For a bowler with so much guile and variety, and not inconsiderable speed, Hilfenhaus always seems at bowling crease, buzzing like a bee.

But now the sting in the tail.

Hilfenhaus' greatest series yet in his 20-Test career, has no scalp of Sachin Tendulkar to show. Indeed, the iconic batsman has been more than a match for Hilfenhaus in the series.

Tendulkar has struck 77 runs from the 93 balls against Hilfenhaus. Sixty of these runs have come by way of boundaries.

Tendulkar has roundly square cut him, as was the case in the second innings in Sydney, or driven him straight on either side as was the instance in Melbourne. That's when Hilfenhaus mate, Peter Siddle has stepped in and dealt with Tendulkar.

It's a reflection of Michael Clarke's growth as a captain that he took Hilfenhaus away when Tendulkar strode to the crease in Perth.

In the second innings, Mitchell Starc bowled just a one-over spell to Tendulkar in which the Indian was dismissed. Starc was removed and Hilfenhaus was back at harassing the Indians.