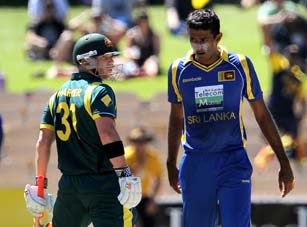 Unwavering spells from Clint McKay and the stand-in captain Shane Watson delivered the triangular series trophy to Australia in a fittingly tense third final against a doughty Sri Lanka at Adelaide Oval.

As the injured captain Michael Clarke watched intently from the boundary's edge, Brett Lee and McKay nipped out Sri Lanka's top four batsmen inside the first 10 overs, after the visitors had threatened to repeat the runaway start they had made in Tuesday's second match.

Upul Tharanga and Lahiru Thirimanne threatened a recovery, but Watson was stinginess itself in the middle overs and McKay returned to help round up the Sri Lankans 16 runs short, the fitting final chapter of a compelling limited-overs tournament. The visitors' contribution to the summer was underlined by Tillakaratne Dilshan's selection as player of the series.

McKay's figures were his best in international cricket, and followed a critical 28 at the tail-end of Australia's innings. Watson will now take a weary but happy team to the West Indies for the ODI portion of the tour, having delivered the first triangular series contested in Australia since 2008.

Australia's fielding and bowling effort was its best for some weeks, and needed to be after the batsmen had cobbled only 231 on a slowing pitch. Led adroitly in the field by Mahela Jayawardene, the visitors had not been perturbed by an opening stand of 75 at better than five runs an over between David Warner and Matthew Wade, and chipped away diligently at the hosts with a combination of spin and reverse swing. No Australian batsman passed 50 as they were bowled out in the final over.

Rangana Herath and Farveez Maharoof shared six wickets, while Nuwan Kulasekara also contributed to a tidy ensemble, of which only Lasith Malinga struggled to contain.

Herath bowled his best and most incisive spell of the tournament to return 3-36, helped by the use of the same pitch that had hosted Tuesday's second final. As he had done in that match, Dilshan took the new ball and bowled his overs with thrift and direction.

Taking Sri Lanka's lead, Watson opened up with the spin of Xavier Doherty at the other end to Lee, but the initial gambit did not work. Dilshan and Jayawardene capitalised on Doherty's errors of line and length, collecting four boundaries from his first two overs as they swept to 0 for 33 from the first four overs.

Lee was also slipping in a final effort for the home summer, and he gained a critical break when Dilshan tried to work a lifting delivery to the leg side and managed only to loop a catch to cover from the front-edge of his bat. Kumar Sangakkara looked in truly sparkling touch upon his arrival, and had sprinted to 19 from eight balls when Lee coaxed an edge from his ninth - the high chance very well held by Watson.

McKay had replaced Doherty, and was soon settled into a precise spell that exploited the vagaries of a wearing surface to the maximum. Dinesh Chandimal was pinned lbw by a delivery that whirred in at middle stump, before Jayawardene was undone by another that seamed back just enough to beat his forward press and graze off stump.

Extremely unsteady at 4 for 53, Thirimanne and Tharanga fought to keep the chase afloat, but the caution forced by the loss of early wickets forced the required rate back up into awkward territory against the older ball. Watson, Nathan Lyon and Daniel Christian bowled intelligently without a wicket, as the match and series edged towards a nervous finish.

Thirimanne had added 60 with Tharanga and the Australians had grown tense by the time Watson found a way to eke out a wicket. Angling across Thirimanne, he coaxed a sliced drive that flew low into Warner's safe hands at backward point. Kapugedera could manage only 7 before he edged another McKay delivery, the deflection held by a diving Wade.

Kulasekara threatened a repeat of his Gabba heroics, cracking two boundaries in a brief stay, before Lee followed the batsman's retreat outside leg stump to cramp his room and prompt a catch to mid-on. Maharoof had been held back to No. 9, and he would provide a calming presence alongside Tharanga as the target was whittled down.

Watson had led his side well in testing circumstances, but he perhaps erred in his judgement to let Sri Lanka sneak closer. Having bowled five searching overs for only eight runs, Watson nonetheless preferred two overs of Doherty's spin, costing 16 runs. By the time he recalled himself to the attack, Watson had only 30 runs to defend from the final five overs.

This all made Watson's sixth over, the 46th of the innings, crucial. He responded in the best possible fashion, conceding only two runs and finding Tharanga's outside edge. Next over McKay found a way through Herath, and 17 were still required when he yorked Malinga.

In the afternoon, Warner and Wade were conscious of the need for greater impetus at the top of the innings and played their shots early on, though taking more liberties against the pacemen than Dilshan's part-time spin.

Warner cleared the boundary once and looked rather more fluent than he had during most of his century on Tuesday, but on 48 he edged a bouncing delivery from Maharoof to Kumar Sangakkara.

Wade had been struggling physically, vomiting at one point in what appeared an attack of gastro, but it was a surprise when a punchy Watson picked out Herath on the leg-side boundary off Dilshan's bowling, the fielder clasping the sharp chance to his chest.

Michael Hussey's stay was brief, Dilshan's swift gather and throw from short third man finding him short of his ground after he had called Wade through for a single. Sri Lanka's sense of momentum only grew when Wade's dogged stay was ended by Herath, who coaxed an edge that Sangakkara held with a juggle.

Forrest could make only 3 before misreading Herath's length and being bowled by a delivery that straightened just enough to beat his defensive blade and flick off stump. David Hussey was given lbw to a ball that would have passed over the top of the stumps, while Christian was undone by a Maharoof slower ball that he could only punch to mid off.

McKay and Lee did their best to swell the total in the closing overs, and their contributions were ultimately vital to a fighting victory.