World Twenty20 hosts Sri Lanka are to beef up security after angry fans clashed with baton wielding police in Hambantota where the home side lost a match to South Africa, officials said on Sunday. 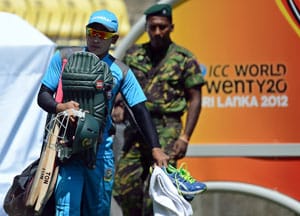 World Twenty20 hosts Sri Lanka are to beef up security after angry fans clashed with baton wielding police in Hambantota where the home side lost a match to South Africa, officials said on Sunday.

Local residents in the southern port town stormed the ground after they were told that tickets for Saturday's match at the 35,000-capacity Mahinda Rajapakse International Stadium had been sold out, a security official told AFP.

"The crowds got very boisterous and they smashed the barricades and forcibly entered the grounds," the official said, asking not to be named. "The baton charge did not deter them. A few thousand got in."

Heavy rains shortened the group C game to seven-overs-a-side, which South Africa won by by 32 runs.

"Their anger was because they could not enter the grounds," another official said. "When they broke down the barricades and came in they started shouting and making a big rumpus."

Camillus Abeygunawardena, the top security officer for the tournament, said there were unruly scenes outside the stadium, but insisted that players and spectators inside the stadium were well protected.

"The problem was that locals residents wanted to get in, but they did not have ticket," Abeygunawardena said. "That is when trouble started."

With Hambantota not due to host any more matches, he said security would be stepped up for the rest of the tournament in Pallekele and Colombo, but was confident there will be no repeat of Saturday's incident.

The clashes between police and fans came despite an unprecedented security operation for the tournament, the biggest sporting event ever to be hosted by Sri Lanka.

Bodyguards from the Ministerial Security Division (MSD) and commandos of the elite Special Task Force have been deployed to guard players in a drill usually reserved for visiting heads of state.

Armed security has been deployed at team hotels where floors occupied by players have been declared out of bounds for other hotel guests.

Sri Lanka's Tamil separatist war ended in May 2009 with government forces declaring victory over the separatist Tamil rebels, but no international match or players in Sri Lanka had been targeted by the militants.