Kumar Sangakkara played a stellar knock and contributed to Sri Lanka's victory over the West Indies in a rain curtailed match that lasted over two days. 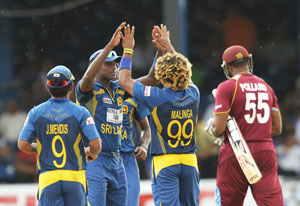 Kumar Sangakkara played a stellar knock and contributed to Sri Lanka's victory over the West Indies in a rain curtailed match that lasted over two days.

Sangakkara smashed 90 off 95 balls, single-handedly taking Sri Lanka to 219 for eight after they resumed from an overnight 60 for three in the fifth match of the tri-series. Rain continued to lash the Queen's Park Oval on Monday, reducing the contest to 41 overs a side.

The West Indies were set a revised target of 230 runs and they ended up with 190 for nine. A spirited 123-run partnership between Lendl Simmons (67) and Darren Bravo (70) went in vain.

The West Indies ended the league stage of the competition with two wins from four games, garnering nine points.

Sri Lanka too have nine points but have a better run rate and game in hand. They play India here Tuesday ahead of the final July 11. India have five points from three games and find themselves in a must win situation.

The West Indies had an awful start to their chase. Shaminda Eranga and captain Angelo Mathews wrecked the home team's top order, reducing it to 31 for four in the ninth over and seeing the back of the explosive Chris Gayle (14). (Also see: Match in pics)

Simmons and Bravo had a task at hand but they found it difficult up the scoring rate. The West Indies were crawling 60 for four in 20 overs, needing another 171 off 126 balls.

As their partnerships progressed, the runs started coming. Simmons was the aggressor, smashing five fours and four big ones during the fifth wicket stand. The target seemed gettable now.

With the rain expected anytime and West Indies behind the Duckword-Lewis score, Simmons attempted another six only to be holed out at deep cover.

Stand-in captain Kieron Pollard came in next and his innings lasted just four balls, continuing his dry run in the tournament. The West Indies were left with too much to score towards the end.

Sangakkara got support from Matthews (30) in a match being played over two days due to rain.

A passing shower delayed the match start. The game was reduced to 45 overs a side before the teams got on the field.

The play could only last for 12 overs as rain hit the ground again, leaving Sri Lanka at 122 for four in 23 overs. Sangakkara was on 40 and Mathews 17.

The match was further curtailed to 41 overs when Sri Lanka came out to bat again.

The disruption did not help the visiting side which found it tough to settle against West Indies speedsters.

Kemar Roach (4/27), who struck twice in his lethal spell Sunday, continued to trouble the batsmen removing Mathews and Jeevan Mendis in the same over. Sri Lanka now were 147 for six in 35 overs.

Sangakkara was still in the middle and he gave some much needed impetus to the innings.

While Roach was out of the attack, the southpaw punished Tino Best for bowling loose balls, smacking him for a six and four. In all, he collected six boundaries and a maximum.