The Sri Lankan captain came good with both bat and ball against the West Indies while Kumar Sangakkara showed all his wisdom with the bat with a 95-ball 90. 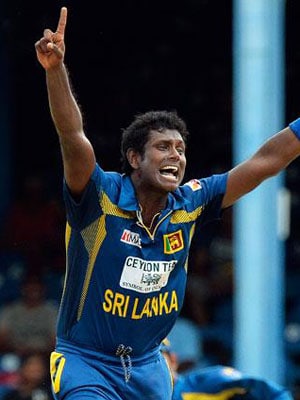 Within sniffing distance of making the final of the tri-nation series, Angelo Mathews seems to be peaking in time for Sri Lanka. An all-round performance from the Lankan skipper helped his team beat West Indies by 39 runs (D/L method) in a rain-affected game played over two days.

The victory against the Caribbeans took Sri Lanka to the top of the points table and almost assured them a berth in Thursday's final. The Lankans play India at Port-of-Spain on Tuesday and only if the islanders lose in excess of 200-plus runs, their chances of making the final get jeopardized. (Read: The permutations and combinations)

After his 30 off 27 balls and a four-wicket haul, Mathews will back himself and the Lankans to play the tri-series final. Mathews' 4/29 was his best bowling figures against the West Indies and he can be really effective on Caribbean tracks which have lost their pace over the years.

It is not easy playing a rain-hit game over two days. The Lankans are upbeat after Monday's win and want to carry the momentum forward against the Indians, to whom they lost in the Champions Trophy semis recently. (Points Table)

The 26-year-old Mathews said: "I am very pleased with the boys, they showed a lot of character, especially yesterday (Sunday). It is tough to play around rain delays batting first. We had to get the runs, and I am glad that we got the runs."

Of course, the man who really did the job for Sri Lanka was former skipper Kumar Sangakkara. His unbeaten 90 off 95 balls was invaluable considering the rain was playing havoc with the game. Sangakkara helped Lanka score 72 off the last six overs and this proved decisive. He will remain India's biggest threat.

Pressure, it will be on India. With no Mahendra Singh Dhoni to guide Team India's talented upstarts, Tuesday's contest will not only be restricted to batting, bowling and fielding skills.