The tri-series thrown wide open by India's emphatic comeback, the West Indies and Sri Lanka will lock horns in Port of Spain on Sunday in their crucial last league match with the hosts needing to win the game to secure a berth in the final.

Torrential showers have forced the abandonment of play in the fifth match of the Tri-Nation Series between the West Indies and Sri Lanka at the Queen's Park Oval on Sunday. The match will resume, weather permitting, on Monday. (Scorecard) 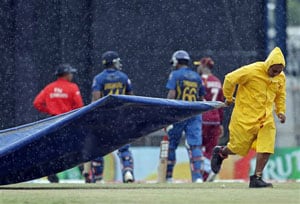 20:32 (IST): It's raining at the moment and players have been asked to leave the ground. Meanwhile, Kumar Sangakkara and Lahiru Thirimanne added 31 runs for the fourth wicket before rain came in. Sri Lanka 60 for 3 after 19 overs.

20:08 (IST): Kumar Sangakkara and Lahiru Thirimanne are battling it out in the middle. Tino Best comes into attack. Sri Lanka 50 for 3 after 15 overs.

19:35 (IST): Sri Lanka are in big big trouble here and Kemar Roach is on fire. Dinesh Chandimal's poor form continues. He goes for a drive but misses it completely, ball goes through bat and pad to hit off stump. Sri Lanka 29 for 3 after 6.2 overs. Lahiru Thirimanne joins Kumar Sangakkara.

19:25 (IST): Sri Lanka lose both their openers and both opening bowlers have bagged a wicket each. Mahela Jayawardene (7) edges bouncer to Devon Smith at point off Kemar Roach. Earlier, Upul Tharanga was caught at cover by Darren Bravo off Jason Holder. Sri Lanka 21 for 2 after 5 overs. 19:12 (IST): Upul Tharanga dropped on 5 by Johnson Charles behind stumps off the bowling of Kemar Roach. West Indies missing a regular keeper here. Sri Lanka 16 for no loss after 3 overs. 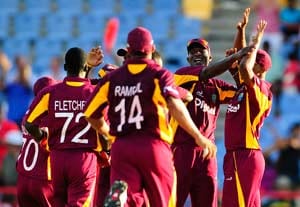 Lendl Simons gets a game.

18:30 (IST): West Indies win the toss and opt to field against Sri Lanka. News from the Windies camp is that Johnson Charles will keep wickets.

18.00 (IST): Dwayne Bravo is replaced by Lendl Simmons and Kieron Pollard will lead the team.

West Indies have a shot at making the final if they beat Sri Lanka today. The Lankans are in a bid to stay alive in the tournament as India shall follow this match very keenly.

Dwayne Bravo's men will have to regroup quickly against Angelo Mathews' side, which is flying high after demolishing India in its previous game.

But the West Indies can draw confidence from their earlier game against Sri Lanka which the hosts won comfortably.

The West Indies, which seemed like an on-a-roll side, was brought back to the ground rather brutally on Friday. At first their bowlers were hammered by a rampaging Kohli and later their batsmen had no answer to the questions that a disciplined Indian attack posed.

The over-reliance on Chris Gayle's pyrotechnics also stood out as no Caribbean batsman showed the stomach for a fight after his early departure.

Johnson Charles was the only one to give a decent account of himself with a 39-ball 45 but he was also guilty of letting slip a good start.

The Sri Lankan batting, on the other hand, was the most decisive factor in their win against India.

Upul Tharanga played a magical knock of 174, which included 19 fours and three sixes. Even if he does not replicate that effort, anything similar would be just enough for the islanders.

Add to this Mahela Jayawardene, who got into the groove with a hundred, skipper Angelo Mathews and Kumar Sangakkara and the Lankan batting order looks formidable from top to middle.

On the bowling front, the Caribbean pace attack would certainly revel in home conditions but they did crumble when faced with an Indian line-up which was willing to wait and apply itself before going for big shots.

Nevertheless, Kemar Roach and Tino Best would pose a challenge and some magic is also awaited from the spin ace Sunil Narine, if he recovers from a finger injury to take the field on the morrow.

The Lankan bowlers bowled magnificently against India and they would be aiming to continue the good work but a Lasith Malinga special is still to be seen in the series.