Luke Wright smashed an unbeaten 99 off 55 balls as defending champions England knocked Afghanistan out of the World Twenty20 with a 116-run victory in Colombo on Friday. 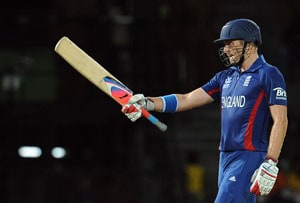 Luke Wright smashed an unbeaten 99 off 55 balls as defending champions England knocked Afghanistan out of the World Twenty20 with a 116-run victory in Colombo on Friday.

England, sent in to bat, piled up 196-5 after a bad start before Afghanistan were dismissed for 80 in 17.2 overs, having narrowly avoided being shot out for the lowest total ever in Twenty20 internationals.

The minnows were reduced to 26-8, and in danger of falling below Kenya's 67 against Ireland in 2008, when Gulbodin Naib and Shapoor Zadran provided unexpected resistence by adding 44 for the ninth wicket.

Naib, who came to bat at number eight, scored more than half of his team's runs before he was last man out for 44 off 32 balls that included five fours and three sixes.

But none of the other batsmen reached double figures as Jade Dernbach, skipper Stuart Broad, Samit Patel and Graeme Swann picked up two wickets each.

Afghanistan's second successive defeat in the tournament -- they had lost to India by 23 runs on Wednesday -- meant both England and India qualified for the Super Eights round from group A.

Wright hit eight fours and six sixes in the highest score by an Englishman in World Twenty20 after Craig Kieswetter was bowled by Shapoor in the first over before a run had been scored.

Wright, who was on 97 with one ball remaining, was denied a century when he managed just two runs off Dawlat Zadran. But he helped England plunder 87 runs in the last five overs.

England struggled to 15 runs in the first four overs, before the innings gained momentum when 23 runs were scored off the fifth over bowled by Shapoor.

Alex Hales helped Wright put on 69 for the second wicket before he was run out for 31 in the 10th over.

Eoin Morgan joined Wright to add 72 for the third wicket, himself making 27 off 23 balls before he was dismissed in the 17th over attempting a big shot off Izatullah Dawlatzai.

Izatullah picked up a second wicket in his next over, trapping Jos Buttler leg-before for 15, but was then hit for three successive sixes by Wright.

Afghanistan, who had been given a pep talk by Indian great Sunil Gavaskar and Aravinda de Silva of Sri Lanka on Thursday night, never recovered after losing three wickets for 14 runs by the fourth over.

It soon became 22-5 in the sixth as Jonny Bairstow took a stunning diving catch at fine-leg off a skier from Asghar Stanikzai.

England play India in the group's last match on Sunday.