West Indies beat Sri Lanka by 36 runs in Colombo to lift the ICC World T20 2012. Here is a look at the game of numbers which played their part throughout the match. A glimpse of the match through the eyes of the statistician: 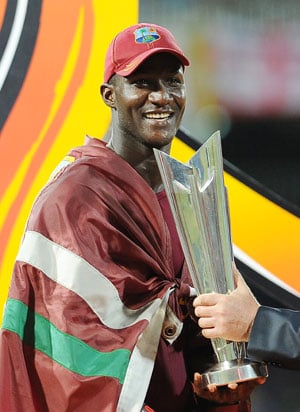 West Indies beat Sri Lanka by 36 runs in Colombo to lift the ICC World T20 2012. Here is a look at the game of numbers which played their part throughout the game. A glimpse of the match through the eyes of the statistician:

# Marlon Samuels' superb 78 off 56 balls is the highest individual innings by a West Indian batsman against Sri Lanka in T20Is.

# Samuels' above knock is his highest ever in T20Is, surpassing the 58 against Bangladesh at Dhaka on October 11, 2011.

# West Indies have registered their first win in five games over Sri Lanka in T20Is.

# West Indies' first World Twenty20 win is their first World title since 1979.Â  Their 36-run victory is their third largest by runs' margin in the ICC World Twenty20 - the biggest is by 74 runs against Australia at Colombo (RPS) on October 5, 2012.

# The match has produced an aggregate of 238 for 16 wickets - the lowest in an ICC World Twenty20 final.

# Sunil's marvellous performance is the best by a West Indian bowler in the ICC World Twenty20 2012.

# Shane Watson has received his second Player of the series award for managing 249 at an average of 49.80 - the most by a batsman in the just concluded tournament - and capturing 11 wickets at 16.00 runs apiece.

# Mendis (4/12) has registered his best bowling figures against the West Indies in T20Is.

# Mendis' excellent bowling average of 13.48 is the best in the ICC World Twenty20.

# Samuels' innings is the highest in a final of the ICC World Twenty20.Â  He has got his first Man of the Match award in T20Is.

# Mahela Jayawardena (33) has posted his highest score in tournament finals in T20Is.

Comments
Topics mentioned in this article
Gary Kirsten Aftab Alam Virender Sehwag Ajantha Mendis ICC World Twenty20 2012 Cricket Marlon Samuels
Get the latest updates on IPL 2020, check out the IPL Schedule for 2020 and Indian Premier League (IPL) Cricket live score . Like us on Facebook or follow us on Twitter for more sports updates. You can also download the NDTV Cricket app for Android or iOS.