Vanquished Sri Lanka have nothing to be ashamed of

It was the giant party that never took off, a celebration of triumph and glory that had to be put on hold, again. 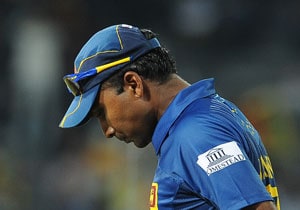 It was the giant party that never took off, a celebration of triumph and glory that had to be put on hold, again.

An evening that began with so much promise and hope ended in disappointment and tears. For 35,000 people at the R Premadasa Stadium on Sunday night, 21 million others in the country and millions of Sri Lankan fans across the world, the national team's loss to the West Indies in the final of the ICC World Twenty20 will remain a bitter pill to swallow for a long, long time to come.

That it was the fourth time in as many ICC finals that Sri Lanka ended up on the losing side merely added to the gloom and despondency across the nation. Previous losses had been fashioned by extraordinary efforts from inspired individuals in the opposition ranks - Adam Gilchrist in the final of the World Cup in Bridgetown in 2007, Abdul Razzaq and Shahid Afridi at the World T20 at Lord's in 2009, and Gautam Gambhir and Mahendra Singh Dhoni in the World Cup in Mumbai last year.

It's fair to say that during those campaigns, Australia, Pakistan and India respectively had won the crowns. On Sunday night, Sri Lanka lost it, Marlon Samuels's incandescence notwithstanding.

Sri Lanka's bowlers gave nothing away in the first 11 overs of the final, eliminating the Chris Gayle threat and keeping the West Indies down to 38 for 2. Then, Samuels exploded with an attack of epic proportions on Lasith Malinga; that's where the game was won and lost.

Samuels's 78 must go down as one of the greatest Twenty20 innings of all time, not merely because he made more than half the West Indian runs, but because of the bruising manner in which he made them. By the time he was finished, the momentum had perceptibly shifted the West Indies' way. When Sri Lanka came out batting, it was clear that they were timid, hesitant, uncertain, almost afraid of failure; the West Indies, by contrast, were humming. They took the crowd out of the equation by snaring Tillakaratne Dilshan early, and as self-doubt gnawed even at Mahela Jayawardene and Kumar Sangakkara, two of Sri Lanka's brightest batting jewels, the battle of the mind had been emphatically won.

"As senior players and experienced guys, you tend to take more responsibility and control things," Jayawardene said. "You want to perform in big tournaments. That's the challenge for us and we enjoy that challenge."

Sri Lanka have nothing to be ashamed of, make no mistake. For a tiny island nation with a very small pool to choose from, Sri Lanka have overachieved in world cricket, but whether that will be any consolation to Jayawardene is a moot point. His eyes bright with unshed tears as he bravely fronted up to the media, Jayawardene was clearly hurting at being part of a losing side for a fourth consecutive final. Even at that early stage, perhaps, the realisation had sunk in that with Sunday's defeat had gone his last chance of leading Sri Lanka to a world title; equally, there was in him a sense of having let the fans down, of letting a nation down when everything, it seemed, had been aligned towards propelling Sri Lanka to the title.

"The fans have been fantastic. From day one, they have been behind the team," Jayawardene said, searching for words not because he was trying to be politically correct but because he was so overcome by the emotion of it all. "As a team, we gave everything we had in a big tournament. We wanted to win to give something to the fans who have been cheering for us for quite some time. I am very disappointed, we had a full house today but we didn't execute a good game plan. We were not ruthless enough. I am very disappointed for the fans that we couldn't give them what they wanted but I am very proud of the boys for the way they played throughout the entire tournament."

The fans, it must be stressed, were impeccably behaved. They stayed on to cheer the West Indies and enjoy their unique celebrations, and they didn't boo or jeer or heckle their heroes. True, they believed they deserved more, but they also had the maturity and the grace to understand that their team hadn't been short on effort and commitment. And, that if they hurt so much, so would the eleven men who spilled their guts on the park and still came out second best.

Jayawardene's decision to quit the T20 captaincy was no spur of the moment call. Win or lose, he was going to bow out on Sunday to pave the way for what he called a 'younger leader' to take over. In all probability, that will be Angelo Mathews, already the vice-captain across all formats whose apprenticeship couldn't have been better with Jayawardene and Sangakkara to learn from and turn to for guidance and advice.

As the world savours a rare West Indian triumph, the universal favourites, Sri Lanka will quietly introspect and rue a glorious opportunity gone by. It might be tempting to term four successive losses in grand finals as a choke; Sunday night surely was, even if the first three weren't. These wounds, fresh and festering, will take some time healing.

Comments
Topics mentioned in this article
ICC World Twenty20 2012 Cricket Lasith Malinga Kevin Pietersen
Get the latest updates on Fifa Worldcup 2022 and check out  Fifa World Cup Schedule, Stats and Live Cricket Score. Like us on Facebook or follow us on Twitter for more sports updates. You can also download the NDTV Cricket app for Android or iOS.