Chris Gayle's 109 came off 100 deliveries and was embellished with seven sixes and nine fours. That pushed his team on to 209 for four off 37.5 overs and they earned a bonus point as well for reaching their target before the conclusion of the 40th over. 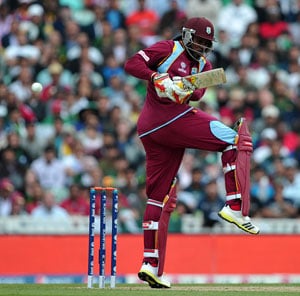 Chris Gayle notched his first one-day hundred against Sri Lanka as he led West Indies to a crushing six-wicket victory with more than 12 overs to spare in the opening match of the three-nation international series at Sabina Park on Friday.

Replying to the visitors' modest total of 208 all out off 48.3 overs, the hard-hitting opening batsman delighted his fellow Jamaicans with another dominant effort on the way to his 21st ODI century. (Also read: Had asked Gayle to go for bonus points: Bravo)

His 109 came off 100 deliveries and was embellished with seven sixes and nine fours.

That pushed his team on to 209 for four off 37.5 overs and they earned a bonus point as well for reaching their target before the conclusion of the 40th over.

That extra point is likely to be significant in the latter stages of the competition, especially with World Cup-holders and recent Champions Trophy winners India entering the fray on Sunday against a West Indies team that will be buoyant following their comprehensive opening triumph. (See pictures)

Any anxiety that home fans may have had about the target facing them were erased by the confidence of Gayle's start.

The former captain dominated an opening partnership of 115 by the 21st over with Johnson Charles, who rode his luck for a supporting but struggling 29 before he fell off the bowling of left-arm spinner Rangana Herath. (Stats)

Ajantha Mendis eventually accounted for Gayle via a miscued swing to leg, but the clever slow bowler, making a return to the Sri Lankan side, did not materialise as the threat his teammates would have hoped.

Darren Bravo was run out near the end for 27 and Kieron Pollard was unlucky to be adjudged lbw to Nuwan Kulasekara, but by then the match was over as a contest and Marlon Samuels, with skipper Dwayne Bravo at the other end, ensured that victory was complete.

Earlier, Sunil Narine returned to his miserly, wicket-taking best, snaring four for 40 as Sri Lanka faltered after a deceptively bright start to be dismissed for 208.

He had an instant impact on the match when he came on in the 18th over, removing the prolific and experienced pair of Mahela Jayawardene (52) and Kumar Sangakkara (17) in his first three overs to immediately put the brake on what had been a promising start by the Sri Lankans.

Jayawardene was at his fluent best, dominating an opening partnership of 62 with Upul Tharanga before they were separated by Bravo.

In contrast, Sangakkara never really got going and the West Indies were understandably delighted when he pushed a straightforward catch to Pollard at cover.

Ravi Rampaul backed up the frontline spinner's effort with three wickets and it was left to Sri Lankan captain Angelo Mathews to hold the innings together following the demise of the two big hitters, his unbeaten 55 being the top score as he capitalised on an early bit of luck when put down by Gayle off the bowling of pacer Kemar Roach.

Speaking after the match, Mathews acknowledged that with Gayle in such a mood, his team's total was never going to be enough.

"We needed early wickets and that didn't happen," he lamented. "And when Chris is in that sort of mind-set, no bowling attack in the world can stop and no target is too much."