Luck was not in India's favour: Dilip Vengsarkar

Lady luck did not favour the MS Dhoni-led Indian squad that resulted in its exit at the Super Eights stage of the ongoing ICC World Twenty20, said former captain Dilip Vengsarkar. 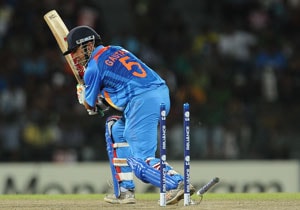 Lady luck did not favour the MS Dhoni-led Indian squad that resulted in its exit at the Super Eights stage of the ongoing ICC World Twenty20, said former captain Dilip Vengsarkar.

"Luck did not favour us. The T20 format is such that luck plays a more important role than skill," the former chief selector said today.

India, who had clinched the inaugural World T20 in South Africa in 2007, were knocked out of the contest in Sri Lanka on inferior net-run rate after finishing with the same number of wins as group toppers Australia and Pakistan.

Dhoni and his men failed in their endeavour to better the net run-rate of the team as compared to Pakistan's, despite eking out a narrow one-run win in their concluding Super Eights game against South Africa yesterday.

Asked whether the absence of an additional front-line spinner to bowl in tandem with R Ashwin had handicapped the Indians, Vengsarkar said there was no point in debating whether this or that could have happened.

Another former skipper and ex-coach Ajit Wadekar was of the opinion that India could have fielded an additional spinner in Harbhajan Singh in the tie against the Proteas.

"Probably we could have played an additional spinner with Harbhajan Singh's return (to the team). But there are so many ifs and buts in cricket. I felt the team deserved to be at least in the semi-finals," said Wadekar.

"The opening combination did not click well," he said.

Jayawardene explained later the change was made to prevent him from missing out on the semi-finals since he was already serving a one-match notice for slow over-rates.

"It's a good example of captaincy by rotation," Wadekar said, referring to Kumar Sangakkara leading the side in their last Super Eights game instead of Jayawardene.

Asked who he was backing to lift the championship with the elimination of India, Wadekar said "West Indies".

"When that man (Chris) Gayle gets going there is none to stop him," he remarked.