Ireland will play in the World Twenty20 in Sri Lanka after hammering Namibia by nine wickets in the preliminary final of the qualifying tournament here on Saturday. 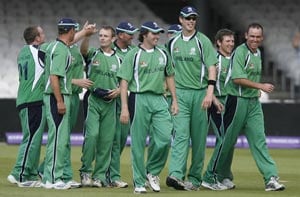 Ireland will play in the World Twenty20 in Sri Lanka after hammering Namibia by nine wickets in the preliminary final of the qualifying tournament here on Saturday.

The Irish, who will join Afghanistan as the two sides to make it through as qualifiers, made short work of a Namibia side who failed to impress with the bat.

The west Africans made just 94-6 off their allotted 20 overs, Ian Opperman top scoring with 26 not out.

South African-born Max Sorensen took 2-8 and Australian-born Trent Johnson 2-19 as Ireland pinned back Namibia, who had beaten the Irish by four runs in group play.

Ireland saw captain William Porterfield dismissed for 20 in their innings but Paul Stirling took immediate control, hitting nine fours and a six in his 32-ball knock of 59 not out that saw his side reach 96-1 in just 10.1 overs.

"We had to come through the hard way through the group stage, stepped up during the big stages, thanks to all our supporters," said Porterfield.

Namibia captain Sarel Burger said: "They bowled outstandingly, and played well throughout. We lost a couple of early wickets and could not recover.

"This tournament was a great experience and gave the guys an opportunity to do well."

Afghanistan earned their ticket to the world Twenty20 on Thursday when they defeated Namibia in the first qualifying final.

The Afghans will play Ireland in the tournament final later on Saturday.

The winners will join Australia and the West Indies in Group B in Sri Lanka, while the losing finalists will complete Group A, which also includes defending champions England and 2007 winners India.