India vs England: Change of pace and faces, as Twenty20 beckons

The first T20I between India and England will be played at Subrata Roy Sahara Stadium in Pune on Thursday (December 20), with the next one slotted for Wankhede Stadium in Mumbai two evenings later. 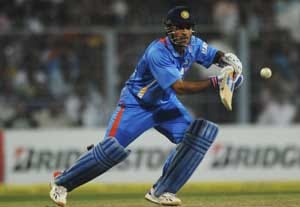 It was Twenty20 International cricket that helped kickstart the legend around Mahendra Singh Dhoni. Perhaps it will help him now to throw a blanket over the cracks that have beset his team this past year. It's a chance for the Indian T20 team to douse the fire, beat the team they bowled out for just 80 during the ICC World T20 2012 in Sri Lanka and, if nothing else, start the process of keeping the criticism in check a little, at least until the Test series against Australia in February-March 2013.

The first T20I between India and England will be played at Subrata Roy Sahara Stadium in Pune on Thursday (December 20), with the next one slotted for Wankhede Stadium in Mumbai two evenings later. And the series starts with the slate wiped clean of the 2-1 Test series scoreline in favour of England. A new format, very different personnel for both sides and a fresh beginning.

Gone are Virender Sehwag, Cheteshwar Pujara, Sachin Tendulkar, Pragyan Ojha and Ishant Sharma from the team that took part in the last Test against England in Nagpur. In place are the format regulars: Yuvraj Singh, Suresh Raina, Rohit Sharma and Ravindra Jadeja with the bat, Piyush Chawla as the second spin option, and Vinay Kumar on the seam bowling front, and then there are Dhoni, Virat Kohli, Gautam Gambhir and R Ashwin.

The squad also has a few fresh faces: Ambati Rayudu, a late inclusion after Manoj Tiwary had to be withdrawn due to injury (as was the case with L Balaji, which facilitated Vinay's inclusion), Bhuvneshwar Kumar, the Uttar Pradesh medium pacer, and Parvinder Awana, the Delhi medium pacer who has been on the fringes of the Indian team for some time now. Ajinkya Rahane and Ashok Dinda, who have both featured infrequently in limited-overs internationals in recent times, were also in the mix.

Take out Dhoni, Gambhir and Yuvraj from that line-up, and you have 12 players, many of whom will be expected to play major roles in the overall rebuilding of the Indian team - across formats - in the months and years to come.

Till recently, with a few exceptions, One-Day International cricket was where youngsters were blooded before they moved up and into the Test team. Are T20Is the new ODIs? Not quite, especially considering the infrequency of T20Is across the world, despite the popularity of franchise-based T20 leagues. But for players like Rayudu, Bhuvneshwar, Awana, and even Rahane, Jadeja, Raina and Dinda, these two matches are potentially steps in the direction of a more regular place in the Indian team.

Along with the changes in his own team, Dhoni had reason to feel good about the changes in the England team from the one that played the Test series. None of the men who made life so difficult for India - Alastair Cook, Jonathan Trott, James Anderson, Graeme Swann, Monty Panesar and, especially, Kevin Pietersen - were around. With Stuart Broad also going back to England with a heel injury, even the captain of the team - Eoin Morgan - was different.

But neither that, nor the memories of the 90-run win in the World T20, meant that the Indian team can slacken.

Morgan himself, Jonny Bairstow, Jos Buttler, Alex Hales, Michael Lumb and Luke Wright are all batsmen known to change the complexion of a T20 game singlehandedly. And in Joe Root and Samit Patel, England have two people who have spent over a month in India already. Needless to say, no team should take a bowling attack picked from Tim Bresnan, Jade Dernbach, Stuart Meaker, James Harris, James Tredwell and Danny Briggs lightly. Between them - leaving out Bresnan - they form the group from which England would be likely to pick when looking for their next lot of Test match bowlers.

Every international match, and series, must be equally important for everyone concerned. But considering the events of the past month or so, the two-T20I series was one that India had to win. Not that a win would make anyone forget about the embarrassment in the Tests, but for a while, the clamouring masses might be made to keep quiet. On the other hand, a defeat here could well raise the pitch of the call for an overhaul in Indian cricket.

Comments
Topics mentioned in this article
Cricket England Cricket Team India Cricket Team India vs England 2012 ICC World Twenty20 2012
Get the latest updates on Fifa Worldcup 2022 and check out  Fifa World Cup Schedule, Stats and Live Cricket Score. Like us on Facebook or follow us on Twitter for more sports updates. You can also download the NDTV Cricket app for Android or iOS.