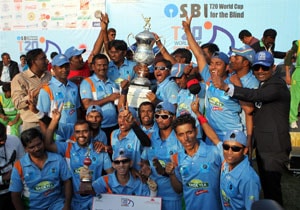 In a surcharged atmosphere with all the trappings of any game between the arch-rivals, India trounced Pakistan by 30 runs in a thrilling final of the T20 World Cup for the blind here on Thursday.

Putting behind its eight-wicket loss to Pakistan in a league tie Dec 7, India took full advantage of batting first despite losing the toss to set an imposing target of 259 and restricting the rival team to 228 for eight wickets in the stipulated 20 overs.

Though India began on high note with opener Prakash Jayaramaiah (partially blind) scoring 14 off the very first over, the sudden exit of vice-captain Ajay Kumar Reddy (partial vision) when he was clean bowled by Zeeshan Abbasi seemed to set off a panic in the ranks.

The team lost four quick wickets to the wily bowling of Mohammed Akram (partial vision) and Idris Saleem (totally blind) and were able to post only 119 runs in the first 10 overs.

Ketan Bhai Patel (fully blind), however, remained at the crease to hit a combative match-winning 98 in 43 balls and helped India reach 258 for eight wickets in the stipulated 20 overs in the company of Dunna Venkatesh (partially blind) who hit 21 off 14 balls.

"I was more concerned about India reaching 300 than my century, which I missed by two runs. In the end, it did not matter as I helped my team to put up a defendable score to win the World Cup," a beaming Patel told reporters after the match.

Chasing a gettable target, Pakistan batters started cautiously to score 40 in four overs and looked dangerous as they cruised to 75 for no loss in seven overs after Indian captain Shekar Naik dropped an easy catch of Akram (partial vision) in the fifth over.

When Akram, who made 32 off 23 balls, and Ali Murtaza (partially blind) who hit 38 off 24 balls, got out, a charged up India swung back into the game with tight bowling and close fielding to slow down the Pakistan run-rate after a delayed breakthrough.

Though Pakistan had more wickets at hand at halfway stage with 108 for two wickets in contrast to India's 119 for four wickets in 10 overs, Indians choked the Pakistani batters from hitting freely resulting in the asking run rate climbing up steeply.

In desperate attempt to accelerate the run-rate and chase the target, a panicky Pakistan lost wickets at regular intervals after Amir Ishfaq (totally blind) and Mohammed Jameel (partial vision) stitched up a half-century partnership in the middle overs.

Indian keeper Jayaramaiah even did a jig in the last but one over, sensing the victory, as Pakistan had to score 45 runs in the last two overs.

For India, Pankaj Bhue was the most successful bowler with three wickets for 37 runs. Patel was adjudged man of the match.

"The difference between the teams was the outstanding field by our boys and their commitment to win," Indian coach Patrick Rajkumar said later.

"Our fully blind players gave away too many extras while their Indian counterparts were more disciplined and fielded better than us," Abbasi pointed out.

World Blind Cricket Council (WBCC) vice-president and Cricket Association of India for Blind (CAIB) general secretary G.K. Manantesh said he was proud of the Indian team, which brought laurels to the country by winning the coveted World Cup.

Legendary Indian keeper Syed Kirmani lauded the Indian lads' spirit and said the final had all the fanfare, twists and turns, excitement and tension of a typical India-Pakistan match.

Comments
Topics mentioned in this article
Cricket India Cricket Team Lord's, London ICC World Twenty20 2012
Get the latest updates on Fifa Worldcup 2022 and check out  Fifa World Cup Schedule, Stats and Live Cricket Score. Like us on Facebook or follow us on Twitter for more sports updates. You can also download the NDTV Cricket app for Android or iOS.