The below-par show of Pakistan's pace battery in the ongoing World Twenty20 has left the country's former cricketers worried and they have called for changes in the line-up in the Super Eight stage starting on Thursday. 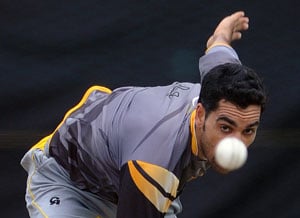 The below-par show of Pakistan's pace battery in the ongoing World Twenty20 has left the country's former cricketers worried and they have called for changes in the line-up in the Super Eight stage starting on Thursday.

"I think it would not be a bad idea to bring in Razzaq instead of Tanvir he can use the new ball cunningly and he will strengthen the batting as well. Razzaq is also good enough to bowl two to three overs the same number of overs Tanvir is bowling in the tournament," Shoaib said.

Shoaib, who retired last year during the 50-over World Cup, also praised the performance of Yasir Arafat.

"I have told him in Twenty20 cricket mixing up deliveries and using the bouncer effectively are important weapons for any pace bowler."

He also felt that if Pakistan won the toss they should opt to chase against South Africa on Friday as they had gained confidence while chasing big totals.

Pakistan's former Test batsman and the ex-coach Mohsin Khan advised the team to think about changing their pace line-up. "I think it would be better if Umar Gul is allowed the choice of bowling his overs in the middle of the innings with an older ball as he is most deadly when he starts get reverse swing," Mohsin said.

Mohsin also felt that Pakistan selectors have the option of using Mohammad Sami with the new ball instead of Gul and also replacing Tanvir with Razzaq.

He said Pakistan's bowling would have to be very disciplined in the Super Eight stage as South Africa, India and Australia had dangerous batting line-ups.

"You can't chase targets of 160 plus everyday. It is too much pressure on the batsmen."

Former Test captain Rashid Latif said he was expecting most of the super eight matches to be very close and tight.

"All the teams that have qualified for this stage are now more experienced and better equipped to play Twenty20 cricket. The scenario has changed since the last World Twenty20 was held in 2010. Now teams have come prepared for this format."

Latif said that Pakistan would have to be careful while playing India and should not take the warm-up win as any indicator.

"I think India has a plan for every match and every opponent. The clash with them on Sunday should be a thriller and I am still banking on our pacers and spinners to carry us through."

Former Test batsman Basit Ali felt that if Pakistan were to progress through to the semifinals and final, Shahid Afridi would have a pivotal role to play as an allrounder.

"Shahid has to bowl well in the coming matches as his overs are vital for the team. His form will decide whether Pakistan will move forward or not," Basit said.

"Since two matches will be played on same day on same pitch you can expect spinners to get more break now."