Eleven to take on the World

There were some extraordinary batting performances, some tremendous bowling efforts and several glorious moments for three and a half weeks and 27 matches that encompassed the fourth edition of the ICC World Twenty20. 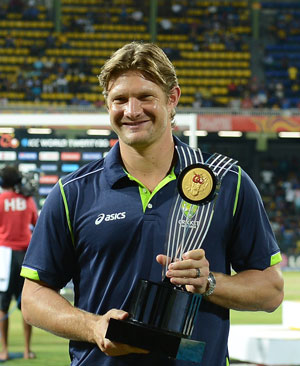 There were some extraordinary batting performances, some tremendous bowling efforts and several glorious moments for three and a half weeks and 27 matches that encompassed the fourth edition of the ICC World Twenty20. Australia did the early running but West Indies, the pre-tournament favourites, had the last laugh, overwhelming Sri Lanka in the final on Sunday night to win their first world title since 1979.

As the world celebrates a popular victory, we thought it worthwhile to pick a dream XI, for all seasons and conditions, from the men who lit up the World T20 stage. Here's our pick:

1. Shane Watson:With 249 runs, the most in the competition, and 11 wickets, Watson was the ultimate allrounder and the Player of the Tournament. He didn't deliver in the crunch game, the knockout semifinals, but had done enough by then to make himself indispensable to any T20 team.

2. Chris Gayle:As entertainers go, there are few who can hold a candle to Gayle. He was a veritable bundle of dynamite, waiting to explode at any instant. His remarkable ball-striking and Gangnam-style celebrations lit up the tournament as he smashed 222 runs at a strike rate of 150, with 19 fours and 16 sixes.

3. Virat Kohli:The classicist, easily the best young batsman in world cricket who showed that even in the T20 game, there is no necessity to sacrifice orthodoxy and correctness. His strokeplay thrilled the connoisseurs, whether he drove on the up or worked his wristy magic through the on-side. 185 runs at a strike rate of 122.51 didn't hurt, either.

4. Mahela Jayawardene (captain): A fantastic leader of men who didn't ask his team to do anything he wouldn't, Jayawardene led from the front, and led with flair, imagination and plenty of conviction, despite the weight of a nation on his shoulders. Unfazed by the pressure, he made 243 runs, striking at 116.26 for 100 balls faced.

5. Marlon Samuels:Another stylist, all lazy elegance and tremendous timing, Samuels saved his best for last. His assault on Lasith Malinga in the final was the stuff of dreams. He ended up with 230 runs at 132.94, and was handy with the ball when the need arose, with his fastish off-breaks not easy to put away.

6. Eoin Morgan:As unorthodox as Kohli, Jayawardena and Samuels are correct, Morgan was the brightest star during a disappointing English campaign. Cheeky and innovative, he tried to provide the thrust that the rest failed to emulate, his stunning innings of 71 not out against the West Indies in the Super Eights an absolute master class. 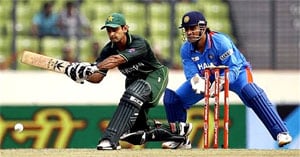 7. Mahendra Singh Dhoni (wk): Dhoni batted far too low down the order for many people's liking, but he pulled his weight as a finisher and was tidy behind the stumps in difficult conditions as the ball often threatened the ankles. Dhoni's glovework won him the nod ahead of Brendon McCullum, his batting put him ahead of AB de Villiers.

8. Dale Steyn:An out and out fast bowler who swung the white new ball prodigiously, Steyn bowled with fire even on the docile Premadasa pitches. Five matches brought him only six wickets, but not even an average of 13.66, a strike rate of 17 and an economy of 4.82 can illustrate his true value.

9. Mitchell Starc:The most impressive of the young brigade of quicks, Starc caught the eye with his ability to swing the ball in to the right-hander from left-arm over. He was often George Bailey's go-to man and he didn't disappoint, with 10 wickets from six matches. His economy was passable, 6.83, his strike rate of 14.4 even more impressive than Steyn.

10. Saeed Ajmal:The magician from Pakistan bowled in the most difficult stages of the innings which explains his economy of 6.79, yet no one really played him with any authority except the Indians and the Sri Lankans, in the semifinal. He ended up with nine wickets in all and a best of 4 for 30. A shoo-in, really.

11. Sunil Narine:Like Ajmal blessed with a variety of tricks, Narine was one of many 'mystery' spinners who brooked careful watching. He was a huge influence on the West Indies, making capital of helpful surfaces and his wonderful skills to snare nine wickets. His economy was staggering - 5.63, despite huge bats and six-hungry batsmen.

12th man Suresh Raina:Explosive with the bat towards the end of the innings, handy with the ball and electric in the field, Raina is a true all-rounder in the T20 format. He only made 110 runs at a strike rate of 126.43, but he often came in with very few overs left and immediately stamped his authority on the game.