The final margin might have been a comfortable 23 runs, but this was far from a walk in the park for India. 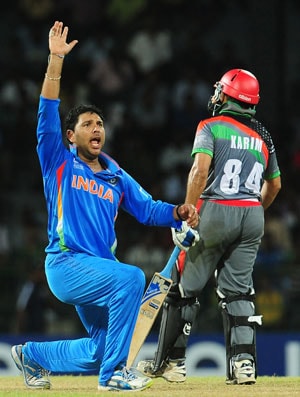 The final margin might have been a comfortable 23 runs, but this was far from a walk in the park for India.

Afghanistan, short on experience but not on enthusiasm or skill, gave the ICC World Twenty20 2007 champions a real run for their money at the R Premadasa Stadium on Wednesday (September 19) night, competing on an almost-equal footing for more than three-fourths of the Group A contest before bowing to a superior side.

Nawroz Mangal had opted to field, saying batting was his team's stronger suit, but that assertion came under scrutiny right at the start. The two unrelated Zadrans, Shapoor and Dawlat, bowled excellent opening spells to harry Gautam Gambhir and Virender Sehwag. Shapoor got rid of both of them during an excellent first spell of 3-0-19-2.

Indeed, if India did manage to clamber to the relative safety of 159 for 5, it was as much due to Virat Kohli and Suresh Raina, as to the schoolboy-like errors that Afghanistan, unaccustomed to the big stage, committed. Four catches, each one relatively straightforward, were carelessly put down, and as many as 14 wides conceded as exuberance got the better of them.

Afghanistan kept fighting and swinging till the end, warming the hearts of the few thousand spectators at the ground and millions more on television with their never-say-die approach. They were eventually bowled out in the final over for 136, defeated certainly but far from disgraced. India breathed a mighty sigh of relief.

As if to prove that Mangal's pronouncement about the batting wasn't without reason, Afghanistan made a stirring assault on India's total. Mohammad Shahzad, the wicketkeeper-batsman who has modelled himself after Mahendra Singh Dhoni, began the carnage with three searing boundaries, the pick of them a wonderful pick-up off a full delivery from Zaheer Khan that was a perfect simulation of Dhoni's patented 'helicopter' shot.

Where Shahzad was unorthodox, Mangal played with more correctness, driving beautifully on the up and urging his team forward. It made for exhilarating viewing, more so with Karim Sadiq, who walked in at No. 3 after Shazad fell to L Balaji, determined to emulate the man he replaced in the middle.

India were positively ragged at that stage. They seemed to be waiting for the batsmen to commit mistakes, but gradually, worry lines began to crease Dhoni's forehead. Yuvraj Singh, exactly six years to the day since he smashed Stuart Broad for six sixes in an over at the ICC World Twenty20 2007, settled his captain's nerves somewhat with a burst of 3 for 24 - he was on a hat-trick at one stage - but Afghanistan weren't going down without a fight.

The game looked done and dusted at 76 for 5, then 100 for 6, but Mohammad Nabi kept his team's hopes alive with a 17-ball 31. He struck the ball long and hard, taking 15 off Zaheer's third over, but was outfoxed by R Ashwin, who held his nerve and induced a catch to long-off.

India didn't take too much away from the contest apart from the two points, apart from the continued good form of Kohli and Ashwin, and more match practice for Yuvraj. They were again let down by their openers, who both looked a bundle of nerves. Shapoor and Dawlat both worked up good pace and extracted considerable bounce to go with a bit of movement, asking uncomfortable questions that neither Gambhir nor Sehwag answered convincingly. And all this with Afghanistan missing the injured Hamid Hassan, their premier fast bowler.

It was left to Kohli, first with Yuvraj and then in the company of Raina, to steady the ship. Yuvraj began with a monster six off Shapoor but fell cutting Sadiq to short third man, having played the support role in a stand of 46 with Kohli. Afghanistan were still in the hunt and ought to have moved into the ascendancy, but they put down Raina on 2, then 19, and let Kohli off on 33.

Had any of those catches been taken, there is no gainsaying what total India might have limped to. Instead, Kohli and Raina made capital. Kohli brought up his fifth consecutive international half-century and Raina raced to 38, helping Kohli add 46 for the fourth wicket. Raina and Dhoni then put on 34 in just 22 deliveries.

Dhoni provided the final push with a four and a six off the last two deliveries of the innings as India piled up 91 from the last ten overs. It made all the difference in the end.

Comments
Topics mentioned in this article
Cricket Afghanistan India Cricket Team Nawroz Mangal MS Dhoni ICC World Twenty20 2012
Get the latest updates on ICC Women's Cricket World Cup 2022 and IPL 2022, check out the Schedule , Live Score and IPL Points Table. Like us on Facebook or follow us on Twitter for more sports updates. You can also download the NDTV Cricket app for Android or iOS.