Ajantha Mendis bettered his own T20 record by taking six wickets for just eight runs as Sri Lanka walloped minnows Zimbabwe by 82 runs in the opening match of the World Twenty20 cricket tournament, here on Tuesday. 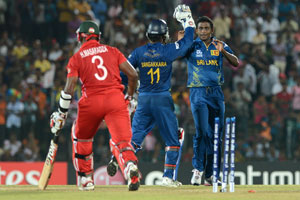 Ajantha Mendis bettered his own T20 record by taking six wickets for just eight runs as Sri Lanka walloped minnows Zimbabwe by 82 runs in the opening match of the World Twenty20 cricket tournament, here on Tuesday.

Sri Lanka recovered from a slow start to post a huge 182 for four and then bundled out Zimbabwe for 100 in 17.3 overs in the Group C match at the Mahinda Rajapakse stadium.

The Zimbabweans struggled to handle spin and were bamboozled by Ajantha (6/8) and Jeevan Mendis (3/24), who shared nine wickets between them.

Ajantha's figures were best in Twenty20 cricket as he improved on his own early figures of six for 16 which he had claimed against Australia, last year.

The hosts owed their impressive total to Kumar Sangakkara (44) and Jeevan as the two left-handers put on a 94-run stand for the fourth wicket.

Sri Lanka were 107 for three in 14 overs but Sangakkara and Jeevan took the game away from the minnows with their superb batting. Zimbabwe had done well in the early part of the Lankan innings but leaked 75 runs in the last six overs to let go the advantage.

The total proved too big to manage for Zimbabwe against an experienced bowling line-up.

Ajantha was too hot to handle as he conceded just eight runs in his four overs and two of them maiden.

The Zimbabweans could manage just five boundaries in the first 10 overs, three of them coming from the bat of Hamilton Maskadaza (20), who was top scorer for them.

Ajantha struck twice in two balls in the sixth over as he first rattled the stumps of Vusi Sibanda (11) and then had skipper Brendan Taylor stumped in the next ball.

Maskadaza was batting confidently and had even dispatched dangerous Lasith Malinga twice to the boundary line but he also failed to pick Ajantha and became his third victim.

Jeevan after contributing with the bat, struck twice in his first over as he scalped Craig Ervine (10) and Malcolm Waller, who went without troubling the scorer.

At 58 for five in 11 overs, Zimbabwe's chase was in disarray and it was matter of time when the Lankans would complete the thumping win.

Ajantha added the scalps of Elton Chigumbura (19), Prosper Utseya (1) and Kyle Jarvis (0) in his tally before Lasith Malinga brought curtains on the rival innings.

Earlier, three of the four wickets that fell in the Lankan innings were run outs as spinner Graeme Cremer (1/27) was the lone bowler for Zimbabwe to make an impression.

Poor fielding also added to the woes of the Zimbabweans. They gave away 20 extras, including seven wides.

Sangakkara's 44 runs came off 26 balls with two fours and a six while Mendis's took 30 balls for his knock and helped himself with five boundaries, including a six.

Zimbabwe pacers Kyle Jarvis and Brian Vitori had provided the side a good start, not letting the Lankan openers score freely and also created half chances.

Tillakaratne Dilshan (39), who likes to score on the off side, was not given many deliveries in his favourite area.

But somehow Zimbabweans could not capitalise on that. They had bowled six wides inside first five overs, which meant that they had bowled an extra over apart from giving six extra runs to the rivals.

Adding to that, they did not take even simple catches like the one offered by debutante Dilshan Munaweera off Chris Mpofu. Malcolm Waller failed to latch on to a low catch.

The two Dilshans then reeled off three boundaries in that over, taking 15 runs. Munaweera's innings ended in a run out when he lost his bat while attempting a single and failed to get back to the crease in time.

Cremer started to trouble the Lankans right from the start and had even trapped Mahela Jayawardene (13) but that ball was called a no-ball for breach of side crease.

However, the spinner succeeded in removing Dilshan by having him caught behind two balls later. Sri Lanka lost skipper through a run out in a mix up with Kumar Sangakkara.

Lanka's 100 came in the 14th over when Mendis swept a Cremer delivery to leg side boundary. Mendis pushed the accelerator button on, hitting a six and a four off Elton Chugumbura. Sangakkara and Mendis kept moving the scoreboard although they did not score many boundaries.

Two of the three sixes in Lankan innings came in the last over -- one was hit Sangakkara just before getting run out and one by Thisara Perera.