A Gayle force, an honest leader and the future beckons

It was all about the Gayle force, his big hitting, his dancing and his penchant for partying during the ICC World Twenty20 2012. While doing so, almost everyone missed some significant entities that were right beneath their noses. Yes, I am referring to the other big hitters in the West Indies line up and an honest captain in Darren Sammy. 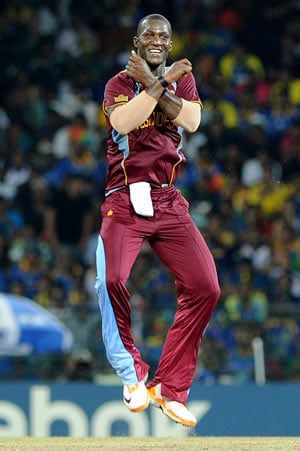 It was all about the Gayle force, his big hitting, his dancing and his penchant for partying during the ICC World Twenty20 2012. While doing so, almost everyone missed some significant entities that were right beneath their noses. Yes, I am referring to the other big hitters in the West Indies line up and an honest captain in Darren Sammy.

The likes of Marlon Samuels, Dwayne Bravo and Kieron Pollard can be matchwinners in their own right, a prospect that was overlooked because that man Gayle keeps stealing the thunder in the T20 format, without really breaking a sweat, unless the weather is hot and humid. For his sheer consistency and the percentage of match winning knocks in the T20 format, it won't be an overstatement to call him the Bradman of the shortest format.

However, on the day that mattered the most, it was Samuels who stood tall to make his presence felt with a telling effort. The matchwinning knock ensured that the trophy accompanied Gayle to the Caribbean, apart from providing the spark that West Indies cricket needed badly.

The celebrations and the riveting jigs from the Windies players did not tell the story of the enormously difficult journey of their captain. Sammy was seen more as a political choice for the job of captaincy at a time when controversies cropped up in the Caribbean islands as frequently as storms brewed in the Florida Keys. It would have not been any easier for Sammy to demand deeds of his players as he was not one with extraordinary achievements to command the respect of his players. He did the job entrusted to him with a cheerful demeanour, though one can safely presume that he would not have been a cheerful man within, even for a happy-go-lucky West Indian. Getting beaten on a regular basis is a nightmare even for captains performing well as individuals, but for one with a modest record like Sammy, the nightmares might have bordered on torture.

However, in a serendipitous way, Chris Gayle helped in alleviating Sammy's problems during his tug of war with the WICB by raking in money featuring in the IPL and other T20 leagues across the world. This was not lost on his fellow countrymen who realised that creditable performances in international cricket were certain to bring in lucrative contracts across the world. The lack of money in cricket in West Indies was the main reason for the waning interest, and it was also the cause of frequent scuffles between the players and the administrators. Once Bravo, Samuels, Andre Russell and others earned their passage to the IPL, it fuelled the fire in youngsters to take up the game that their predecessors dominated in the 1980s.

The availability of greener pastures in other parts of the World served to force the players to focus on the game and perform better in international cricket. The hunger was evident right through the World T20 and for a bunch of talented and carefree cricketers it did not matter who led the side. Sammy got the wholehearted support of the experienced players as well as the future stars, who until then must have perhaps felt he was getting less than what he was giving. Sammy can never be accused of being pretentious and it was a revelation to hear him talk straight from the heart after the triumph. Had it not been for the win, the tribulations of his journey, prior to the moment of glory, would perhaps never have been narrated, for all his honesty. Well, the West Indies have got the fillip they needed and they can rest assured that contracts will follow them henceforth which means that they now need to work on how to stay on top in the future.