India vs Australia World T20: Five Key Battles to Watch Out For

India have never lost a Twenty20 international against Australia in India and will look to continue their dominance when the two teams clash for a place in the World T20 semifinals. 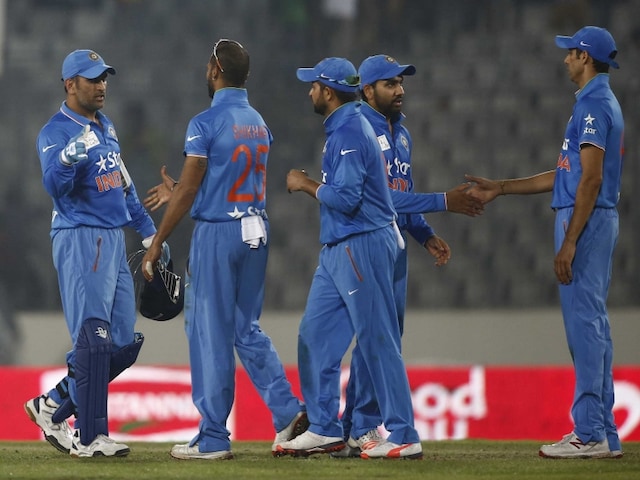 India take on Australia in a virtual knockout clash at Mohali on Sunday that will determine which of the two teams join New Zealand in the World T20 semifinals from Group 2. (India vs Australia, ICC World T20: How Mahendra Singh Dhoni's Team Has Dominated Aussies)

Let's take a look at five key individual battles that could decide the outcome of the match:

Rohit Sharma was in ominous form before the start of the T20 World Cup, smashing the Australians all over the park when the two teams clashed Down Under in the T20 series earlier this year. However, the Indian opener has failed to fire in the tournament so far - scoring just 33 runs in three matches.

The right-hander will be up against Nathan Coulter-Nile. The Australian pacer might not have a wicket to his name in the tournament but has bowled economically. The Mohali pitch seems to be a good batting strip and Rohit will back himself to take on Coulter-Nile in the first six overs.Â Â (World T20: India Face Fierce Rivals Australia in Battle For Semi-final Spot)

India's best batsman versus Australia's best bowler in the tournament so far. Kohli has taken the responsibility of shouldering the Indian batting. His ability of chasing targets is unparalleled but if India do bat first, Kohli will need to be at his best against an improving Australian attack.Â (World T20: Virat Kohli Says He Can Perform Even Without Provocations Against Australia)

The Indian star has scored 102 runs in three T20 World Cup matches at an average of 51. Faulkner, meanwhile, is coming on the back of a record-breaking performance for the Australians in the must-win game against Pakistan. He recorded figures of 5/27 - the best for an Australian in all T20 internationals.

Faulkner has seven wickets to his name and will pose the biggest challenge to not only Kohli but also the other Indian batsmen.

An out-of-form Yuvraj versus an in-form Australian leg spinner. And going by the Indian southpaw's record against spinners off late, Adam Zampa will be raring to test himself against the so-called 'best players of spin'.

Yuvraj has scored just 31 runs in three matches and is seen by many experts as the weak link in the Indian batting line-up. Zampa has no such problem. For a leg spinner, Zampa doesn't turn the ball much but his line and length and his guile has created huge problems for batsmen in this tournament.

The Australian bowler has picked up five wickets in three matches but what is more impressive, is his economy rate of 6.44.

Khawaja has been the best Australian batsman in the tournament so far - scoring 117 runs in three matches at a strike rate of 132.95. Keeping David Warner away from his usual opening slot is a huge feat and this has been brought about thanks to the surety he provides to Australia in the beginning of the innings.

Khawaja will be against the experience of Ashish Nehra. The left-arm pacer has picked up just three wickets in as many matches but has an economy rate of 6.27. He has bowled with a lot of discipline on pitches that have had very little assistance for the fast bowlers. Dhoni will hope that Nehra can continue his form and keep the Australian batsmen, especially Khawaja, in check early on.

India's premier bowler and arguably the best spinner in the world currently hasn't done what was expected of him in the tournament, especially on pitches tailor-made for him. Ashwin has a miserly economy rate of 5.81 but has picked just three wickets. He is India's number one strike bowler and surely captain Mahendra Singh Dhoni will expect a lot more than just bowling economically.

Ashwin will need to be at his best because he will be up against Australia captain Steven Smith, who seems to love the Indian bowling attack. Add to that, he smashed an unbeaten 61 against Pakistan after a few quiet matches and his coming into form is ominous news for India. Smith had no problem against the spin of Shahid Afridi and Imad Wasim and will take on Ashwin in the same ground where he blasted Pakistan's much-talked about bowling attack.