The Board of Control for Cricket in India (BCCI) shared a new video from Southampton where skipper Virat Kohli, Rohit Sharma, Jasprit Bumrah, and several others seen training hard ahead of the World Test Championship final. 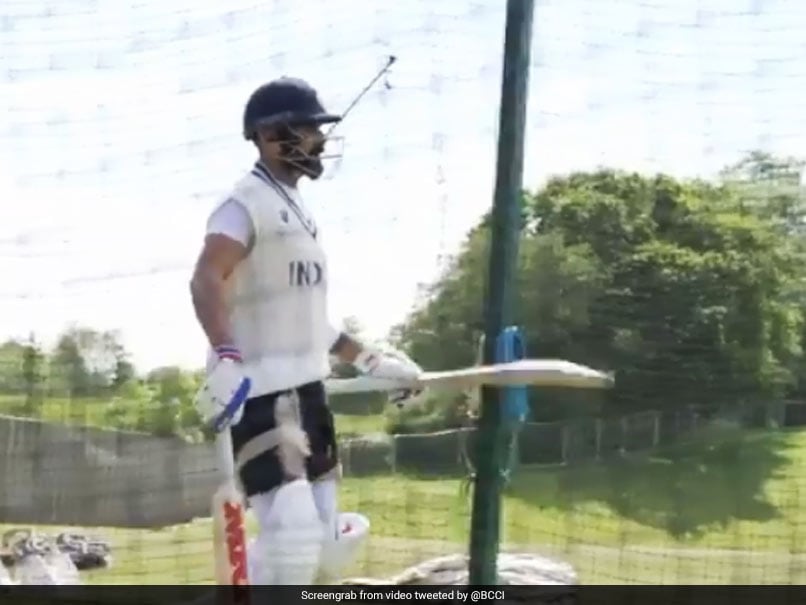 Virat Kohli and other training hard ahead of WTC Final against New Zealand.© Twitter

The Indian team is training hard for the final of the World Test Championship against New Zealand at Southampton starting on June 18. The Board of Control for Cricket in India (BCCI) has tweeted another video of Virat Kohli and the rest of the team practicing in the nets at the ground adjacent to Ageas Bowl Stadium. Cheteshwar Pujara, Ajinkya Rahane, Rohit Sharma, Rishabh Pant, and skipper Kohli were seen hitting hard in the nets. Bowlers too had their intense session- Jasprit Bumrah, Mohammed Shami, and Ravichandran Ashwin were seen bowling in the nets. "Team India get into the groove for the WTC Final," tweeted BCCI.

#TeamIndia get into the groove for the #WTC21 Final pic.twitter.com/KIY1zvjyce

Pant, who scored a century when he played a Test in England last time in 2018, was playing big shots to Ashwin in the video shared by the BCCI. Pant has been India's dependable lower middle-order batsman and the first-choice wicketkeeper-batsman for the Indian team for a while now. He was terrific with the bat in Australia and in the home series against England.

Yesterday, the BCCI had shared the first video of players practicing in the nets after they came out of isolation.

While on the other hand, the opposition New Zealand are playing their second Test match against England, where their captain Williamson is out with an injury. Opener Tom Latham is leading the Kiwi side in the absence of their regular skipper.

The inaugural World Test Championship final is scheduled to be played from June 18 to 22 at the Ageas Bowl Stadium in Southampton.

India Cricket Team
Get the latest updates on SA vs IND 2021-22, check out the Schedule and Live Score . Like us on Facebook or follow us on Twitter for more sports updates. You can also download the NDTV Cricket app for Android or iOS.