Raj Bawa became the first Indian cricketer to bag a fifer in an ICC tournament final when he finished with figures of 5/31 in the U19 World Cup final against England in North Sound, Antigua on Saturday. 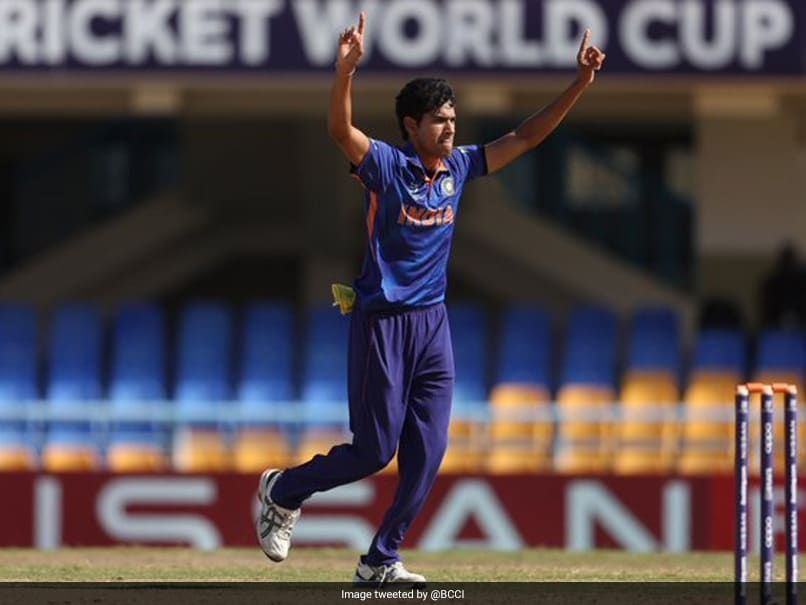 India's Raj Bawa finished with figures of 5/31 in the U19 World Cup final against England.© Twitter

Raj Bawa became the first Indian cricketer to bag a fifer in an ICC tournament final when he finished with figures of 5/31 in the U19 World Cup final against England in North Sound, Antigua on Saturday. Bawa combined with Ravi Kumar, who bagged 4/34, to bowl England out for 189 in the summit clash. Bawa also became the first player since Pakistan's Anwar Ali in 2006 to pick a five-wicket haul in an ICC U19 World Cup final. In Saturday's final, Bawa and Ravi's heroics helped reduce England to 61/6 at one point and 91/7 later on. However, James Rew scored a fighting knock of 95 to keep England in the contest and take them to a total of 189.

India kept taking wickets at regular intervals but not for once did the intensity of the team dropped.

But Rew and James Sales (34 not out) defied India with their 93-run eight-wicket stand.

The Yash Dhull-led India struck as early as the second over when Ravi sent back the dangerous Jacob Bethell (2) cheaply. The man from Bengal darted one in and then got it to hold its line as Bethell missed it completely after playing across the line.

The early blow did not have any impact on George Thomas as he smashed Rajvardhan Hangargekar for 14 runs, including two fours and a six over deep midwicket, in the very next over.

However, Ravi struck again, this time bowling out English skipper Tom Prest who dragged the ball on to his stumps, putting the Indians on the top at the Sir Vivian Richards Stadium.

Having failed to execute his pull shot, thanks to a bottom edge, Prest, who had earlier won a good toss, walked back dejected with his team in a sport of bother at 18 for two in the fourth over.

Notwithstanding the situation his team found itself early into the big final, Thomas continued to attack and collected two boundaries against Ravi.

With Hangargekar going for 19 runs in his first spell, India skipper Yash Dhull effected a bowling change and it worked almost immediately, but Kaushal Tamble could not hold on to Thomas' thick edge off Raj Bawa in the slip.

England needed a partnership at that stage but that was not going to be. Medium pacer Bawa got the well-set Thomas to play an irresponsible shot that got a thick outside edge and landed in the hands of Dhull at cover.

In all sorts of trouble at 37 for three at the start of the 11th over, England's desperate quest for a partnership was not answered, with William Luxton edging Bawa to be out caught behind before England could reach 50 runs.

Bawa was on a hat-trick as George Bell had no answer to an excellent delivery that kicked up and took a deflection on its way to the wicketkeeper Dinesh Bana.

With half the side back in the dressing room in the 13th over, the England U-19 were staring at a heavy defeat, their dreams of winning a first world title in 24 years quickly going up in smoke.

There was not end to England's misery as Rehan Ahmed nicked Bawa to Tambe in first slip to leave the side reeling at 61 for six in the 17th over.

Bowling a tight line and length, India kept up the pressure on England and it paid dividends when wicketkeeper Alex Horton, trying to heave off-spinner Tambe over midwicket, ended up giving a simple catch to Dhull.

England were still seven runs short of reaching 100 at that stage, but they got there soon with James Rew reaching his 50 in 79 balls.

In the company of the James Sales, he extended the England innings and gave his side something to defend.

England U19 Ravi Kumar Raj Angad Bawa James Rew Cricket
Get the latest updates on ICC T20 Worldcup 2022 and CWG 2022 check out the Schedule, Live Score and Medals Tally. Like us on Facebook or follow us on Twitter for more sports updates. You can also download the NDTV Cricket app for Android or iOS.