Dinesh Bana's match-winning shot in U19 World Cup final reminded many of former India captain MS Dhoni's six in the final of the 2011 World Cup final against Sri Lanka at the Wankhede Stadium. 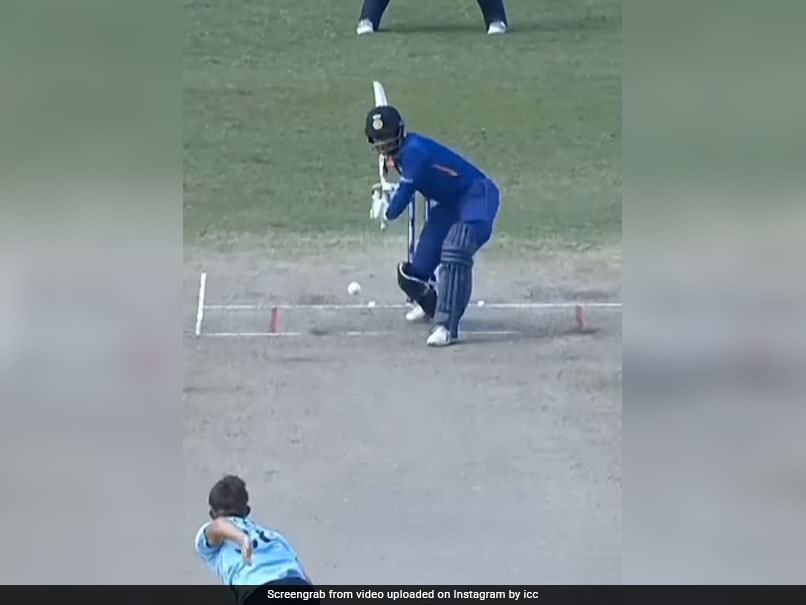 U19 World Cup: Dinesh Bana hit a six over long-on to give India their fifth title.© Instagram

Team India lifted a record-extending fifth U19 World Cup title after they defeated England in the final of the latest edition at the Sir Vivian Richards Stadium in Antigua. India are the most successful team at U19 World Cups, having won titles in 2000, 2008, 2012 and 2018 previously. India wicketkeeper-batter Dinesh Bana hit a six over long-on to give India their fifth title on Saturday. His shot reminded many of former India captain MS Dhoni's six in the final of the 2011 World Cup final against Sri Lanka at the Wankhede Stadium.

Taking to Instagram, ICC likened Bana's shot to Dhoni's, and shared a video of the same.

"Where have we seen this ending before?" ICC captioned the video on Instagram.

India defeated England by 4 wickets in the summit clash in Antigua.

After opting to bat, England could only manage a total of 189 despite James Rew's gutsy 95-run knock.

Raja Bawa became the first Indian player to take a five-for in the final of an ICC event, as he ended the match with figures of five for 31.

Ravi Kumar also took four wickets as India were able to restrict England to a below-par total in total.

Chasing a total 0f 190, India lost the wicket of opener Angkrish Raghuvanshi on the second ball of the innings.

Harnoor Singh and vice-captain Shaik Rasheed then added 49 runs for the second wicket to put India's run-chase back on track.

However, Thomas Aspinwall dismissed Harnoor (21) to put England right back into the thick of things.

Rasheed went on to score a fifty as he and skipper Yash Dhull added 46 runs for the third wicket.

James Sales struck twice in as many overs to dismiss Rasheed and Dhull, as India were reduced to 97 for 4.

However, Nishant Sindhu scored an unbeaten fifty while Raj Bawa also contributed with a fine 35 as India won the match and lifted their fifth title.

MS Dhoni ICC Under 19 World Cup 2022 Cricket
Get the latest updates on IPL Auction 2023 and check out  IPL 2023 and Live Cricket Score. Like us on Facebook or follow us on Twitter for more sports updates. You can also download the NDTV Cricket app for Android or iOS.