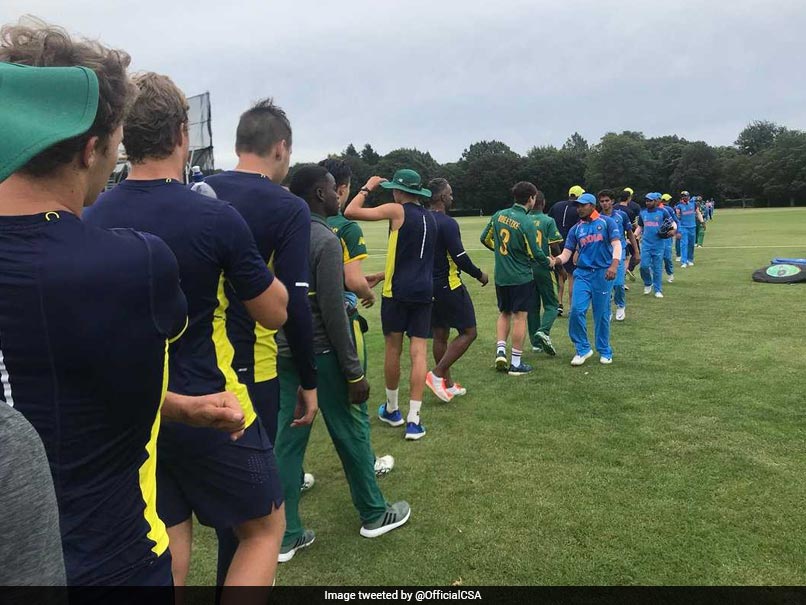 Riding on Bengal pacer Ishan Porel's brilliant bowling performance, India beat South Africa by 189 runs in a warm-up match of the U-19 World Cup. Porel was the pick of the bowlers for India, returning with figures of 4 for 23 as India scored a massive 332 for 8 batting first. Twin half-centuries by Aryan Juyal (86) and Himanshu Rana (68) helped India post a huge total as South Africa lost wickets at regular intervals in the tall run chase.

The Proteas were bundled out for 143 with Porel getting rid of South Africa's top order, claiming four wickets in his eight overs.

Electing to bat, India started off well with openers Prithvi Shaw (16) and Manjot Kalra (31) sharing an opening stand of 54 runs.

However, pacer Akhona Mnyaka got rid of the Indian top order quickly, dismissing Shaw and Shubman Gill in the span of two balls. He claimed Kalra's wicket 10 balls later.

Aryan and Himanshu then steadied the Indian innings as the duo hit eight boundaries and a six each in the 92-ball and 69-ball innings respectively.

Chasing the huge total, Jean du Plessis scored a lone fifty off 82 balls for South Africa before he was trapped leg before on a Shiva Singh delivery in the 38th over.

Singh (2/9) along with Kamlesh Nagarkoti (2/15) and Abhishek Sharma (2/16) picked up a couple of wickets each for India. India captain Prithvi Shaw said the team's batsmen as well as bowlers were acclimatising well.

"It was a good win for us, just getting used to these conditions. We dominated and executed quite well and we are practising hard so all credit to the boys," Shaw said.

Comments
Topics mentioned in this article
Cricket Prithvi Shaw India U19 South Africa U19 ICC Under-19 World Cup
Get the latest updates on ICC T20 Worldcup 2022 and CWG 2022 check out the Schedule, Live Score and Medals Tally. Like us on Facebook or follow us on Twitter for more sports updates. You can also download the NDTV Cricket app for Android or iOS.